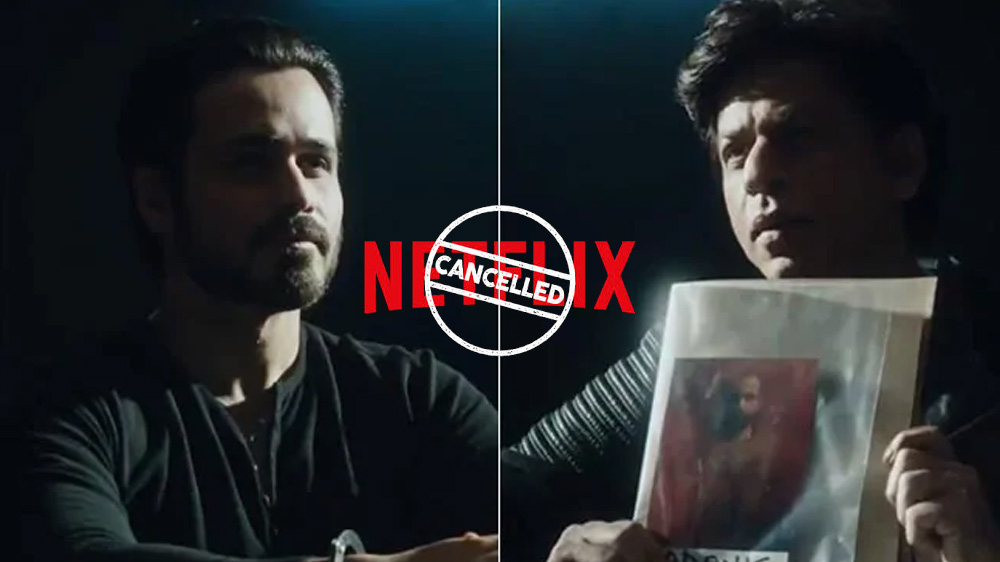 Pakistanis are canceling their Netflix subscriptions and they have Bollywood’s King Khan to blame.

Recently the ‘King of Bollywood‘, Shahrukh Khan released the trailer for his new Netflix series ‘Bard of Blood’. Immediately, an overwhelming number of Pakistanis took SRK to task over stereotyping Muslims as brown terrorists yet again.

While Bollywood has done so for ages, the Pakistani audience expected better from Netflix. Especially since Netflix has also created well-received content like Brown Nation, Dear White People, and When They See Us.

Not even SRK or the writer Bilal Siddiqui stopped once to think about the severity of projecting racist stereotypes against brown Muslims.

While public figures like Mehwish Hayat and Major General Asif Ghafoor condemned this, someone else had a better idea.

This just vindicates what I have been saying for so long. Another week & yet another anti-Pakistan project. Now can we wake up, smell the coffee & see Bollywood’s agenda for what it is?@iamsrk Be patriotic, nobody is stopping you – just don’t do it at the expense of vilifying us. https://t.co/iCElRpJAa1

Stay in bollywood syndrome @iamsrk . For reality see RAW Spy Kulbhushan Jadev, Wing Comd Abhinandan & state of 27 Feb 2019.
You could rather promote peace & humanity by speaking against atrocities in IOJ&K and against Hindituva of Nazism obsessed RSS. https://t.co/0FWqoRQsO6

Unlike Furqan Shayk, Pakistanis don’t have the option of switching to Hulu for the time being. But are brown Muslims really going to allow their money to be used to paint them as terrorists?

Most Pakistani Muslims joined Furqan Shayk and canceled their subscriptions.

I’m cancelling my membership after looking the traliler of #BardOfBlood I and a lot of other Muslim don’t pay you to make us look bad. We aren’t what you’re portraying us to the world because of that shit show. @netflix @FurqanShayk #bycottnetflix pic.twitter.com/RZBsxnq1Dh

Exactly. I am canceling too

I am cancelling my @netflix
Subscription too. All my friends will cancels theirs soon too. We should start a campaign against netflix to cancel our subscriptions until they put down the show.

Yes Netflix should review it's content!!Supporting India's twisted,baseless and inaccurate point of view!!
Going to cancel my subscription!!#netflix#CancelNetflix

What about the nay-sayers that assert this won’t make a difference? Furqan Shayk has some ideas.

“There are about 1 billion Muslims around the world. (Even if) only if 1 million cancels, sure they will give a damn.”

More About Bard of Blood

The series is based on a book ‘Bard of Blood‘ by Bilal Siddiqi.

The trailer opens with a scene in Balochistan. Right off the bat, the ‘jihadi Muslims’ are framed as villains as they plan to execute Indian spies that were attempting to deliver sensitive information to India.

Kabir Anand is then called out to go to Balochistan for a rescue mission.

Bollywood revenge fantasy aside, espionage is an International crime. Realistically speaking, there’s a reason the International Court of Justice (ICJ) did not object to the prosecution of Indian spy Kulbushan Jhadav by the Pakistani authorities.

Hollywood has always painted out non-white demographics to be the villain from Germans, Eastern Europeans, and now brown people. To bumbling idiots ethnic minorities, African-Americans and brown people.

Similarly, Bollywood has always promoted a negative and false image of Pakistan. However, this time, it’s more serious due to the timing and current tension between India and Pakistan.

Though we can’t expect Bollywood and Hollywood to change their old habits overnight, streaming services like Netflix can be made to see where their inclusive content falls short. It all starts with your wallets.