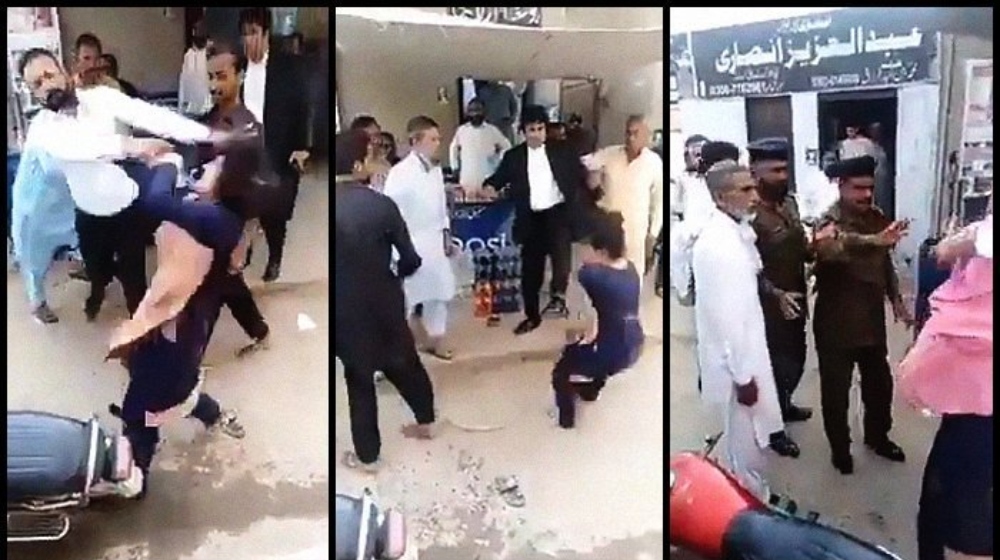 A video os a Pakistani lawyer assaulting a woman outside a court-house in Shakargarh has gone viral. People question how some Shakargarh lawyers were allowed to beat a woman on camera beating as authorities and law enforcement look-on.

Shameless lawyers of Shakargarh bar beating a poor girl in presence of law enforcers. This abominable act must be condemned and concerned authorities must take immediate action for dispensation of justice. @ShireenMazari1 @UsmanAKBuzdar pic.twitter.com/qSbUT8L1ih

The young girl is being identified as Amrat Shahzadi from Shahpur Bhangu. The incident occurred on October 29th outside a local court in Narowal’s Shakargarh area. The young woman Amrat was at the court for a hearing.

Boy Beaten Up By Politician’s Security Guards in DHA Karachi

She is fighting a case in relation to a door in the street near her residence. When the woman tried to enter the lawyers’ chamber they ‘stopped her’ by dragged her outside by her hair. Going on to beat her.

“They stopped me from going into the chamber, dragged me outside the court and started beating me. My arm has been hurt, my leg has been wounded and my hair pulled out.”

While Amrat was being beaten the policemen did nothing. Yet they stepped in to shield the first attacker when Amrat went after him.

Bystanders just looked on, with no one bothering to come for her rescue. It wasn’t until the video went viral that Local Bar Association’s President, Naeem Iqbal made a statement defending the lawyers.

According to the Local Bar Association’s President, Naeem Iqbal claims Amrat came to the court with some men in attempt to kidnap the lawyers. The video evidence says otherwise.

These men here to kidnap the lawyers were nowhere to be seen. Plus they wouldn’t have stood around for their employer to be battered had they been with her.

When a petition was filed against the lawyers, the whole Shakargarh Bar boycotted the courts.

Moral: "Later, the Shakargarh Bar Association boycotted courts as a protest against institution of a case against the lawyers." All such stories end like this pic.twitter.com/jqghnx4Q6G

Ma’am ,Most of Lawyers in Tehsil Shakargarh chamber are Lafanggas ,You better set an example by pursuing it personally.

The viral video actually shows a helpless Amrat being brutally attacked by the lawyers. Truth is if they aren’t held accountable now, they know they can get away with anything.

Good thing Chief Minister of Punjab, Usman Buzdar took notice of the issue. He issued directives to the Narowal District Police Officer to submit a report on the matter.