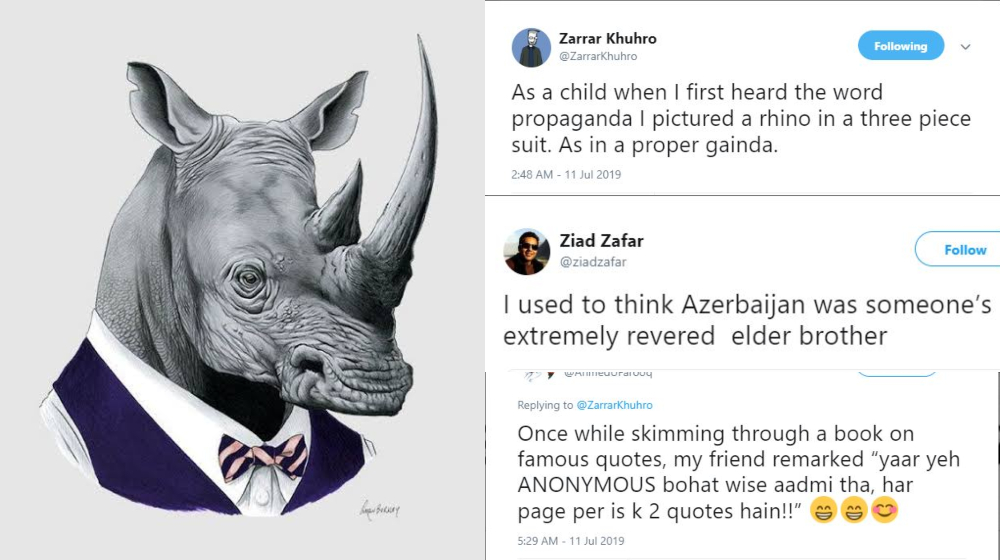 We’ve all had those moments as a child when we misunderstood a word or a phrase. Some of us had to find out the hard way what those things meant.

As it happens, Pakistani Twitter came together to tell all about their confusing exchanges and embarrassing memories with these misunderstood words.

While we’re not brave enough to share the embarrassing stories, we did share the words that changed our lives.

As a child when I first heard the word propaganda I pictured a rhino in a three piece suit. As in a proper gainda.

To be honest, I thought getting some ‘health insurance’ meant that you’re always healthy and people without it can’t go to the doctor. Talk about getting the point minus the part where it doesn’t cover all health expenses.

And then we had this:

I used to think if you had life insurance you dont die.

Imagine trying to meet this ‘Bhai jan‘ in question. Chances of meeting someone that goes by ‘Azer Bhai jan‘ are not that slim.

My first interaction with this exotic name and beverage was as a teenager:

As a child, I thought Tukh-Malanga was the name of a famous Pashtu dancer. https://t.co/37oCDEgGYL

School is confusing in general. We feel you bro:

For me ‘Urdu ki Pehli Kitaab’ was a book by someone named Urdu who somehow managed to write and send that book in our class one. And our great teacher never explained it and I remained confused till 5th grade.

As I child I thought maar was a food item like achaar whenever someone said "Tum ney maar khani hai".

Tolet advertising boards. Used to think they misspelled toilet and the numbers given were so that you could use a toilet nearby in an emergency 😂

Looks like more than one person got this idea:

Its good how these embarassing stories are bringing people together:

My sister used to think AINI SHAHID is a name of a girl who always reaches at the accident to witness and eldest bro took QURBANI KI KHALAIN as you can eat after the qurbani for many years.

lolz, this AINI SHAHID is a true story waisay. A routine evening of 2007, in a newsroom of an upcoming English news channel, suddenly a girl on assignment desk says “yey AINI SHAHID kitni competent reporter hai, she’s always at the spot on time.”

Even Quaid-e-Azam and Allama Iqbal brought people together:

As a child I used to think Quaid e Azam was some sort of a super mazdoor guy who single handedly built Pakistan (?!) 🙄

So I was not alone.
And when I found out that Quaid did not make all these buildings, rather just won freedom then I thought what's the big deal in that?

As a child i genuinely used to think Allama Iqbal went to sleep and saw a dream while asleep about a seperate homeland for muslims. Woke up the next day and discussed his dream with his friends and family.

😂 Relative of mine went Qul, Qul, Qul and put up a pile of date seeds in front of her while we struggled to keep up.

How many people thought ‘anonymous’ was some real writer going by this pen name? Or maybe it was just me?

😁 😁 if only he had said that… would have taken his statement a few levels up! 😁

When I was young and I was traveling via air for the first time my sibling told me the aircraft was an airbus. I thought it was a bus with wings. When we were in the shuttle to the plane I kept waiting for the wings to appear so we could fly.

Growing up with Winnie the Pooh, some of us wanted a pet grizzly:

as a kid, I was told makra (big black ant) is husband of normal cheynti (ant) ….. insane if you just imagine them as husband and wife now 🤦‍♂️

Sawaab and Kabaab? We’ve been there:

As a child, I always thought sawaab means kabab and the one who does good deeds will get a lot of kebabs to eat the day of judgment 🙄

It had always been “ Espatada dukh na koi Yar na wichray” until I ate chicken espatada at #Nandos
Good that now I know what NFAK was craving for.

There it is, an embarrassing childhood story. Salute to these brave men!

I used to think Krimlin as some influential personality in Russia, and the irony is that I was very preparing for competitive exam and thats why I failed.

Came to know very recently that “Pindi” meant Rawalpindi. In our community Pindi is a rice ball moulded by hand and offered to the departed soul by the kin in the post cremation rituals.

Before a meeting asked a junior to write meeting minutes, afterwards when inquired the response was 34 minutes.
It was hard to conceal my smile.

Sometimes, Pakistani Twitter amazes you with great humor. This Twitter trend about misunderstood words definitely restored our faith in humanity’s ability to laugh at themselves. We should do it more often.

Zayn Malik Tweeted A Bollywood Song And Twitter Is Wondering Why