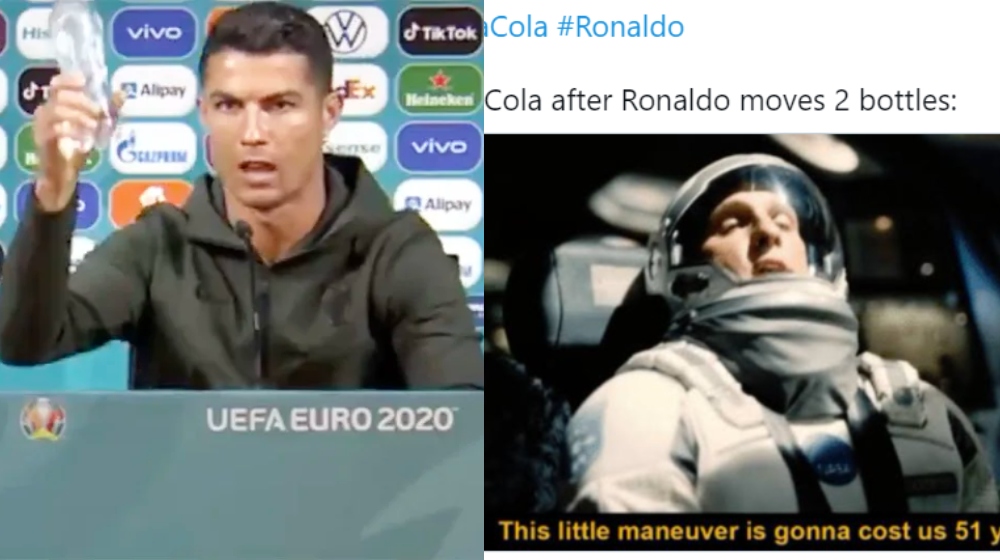 There’s nothing healthy about fizzy drinks but the companies that sell carbonated beverages have always used celebs particularly sports stars to promote their brand. So when famed footballer Christiano Ronaldo snubbed Coca-Cola for water, the impact was huge.

Hours later, the brand faced
the loss of $4 BILLION!

Coke responded to this gesture of the footballer by saying "Everyone is entitled to their drinking preferences."#ronaldococacola #CocaCola pic.twitter.com/shzsfoytxf

The most expensive and influential words. pic.twitter.com/1D9RaTXYsL

Coke has blended in so well with the sports culture we often don’t notice how out of place it really is. From sponsoring sporting events and producing ‘world cup albums’ to having sports stars endorse the brand.

Someone finally pointed out what’s wrong with that.

This seems to be becoming a trend people support.

Footballer Paul Pogba removes a beer bottle placed in front of him during a Press Conference. Being a Muslim, he didn't want to be associated with the alcoholic product. #paulpogba #cocacola #ronaldo pic.twitter.com/MsVRPzKmBQ

Now Twitter is going crazy calling out celebs that promote an unhealthy option while leading a healthy lifestyle.

It even turned into some sort of a sports star versus screen-star face-off. Well at least in India, Virat Kholi is a more marketable brand than Bollywood celebs. That says a lot about who’s really influencing people.

People even pointed out how the Coke parent company also sells bottled water. Dasani, SmartWater, Ciel, Aquarius, and Vitaminwater are Coca-Cola products too. So no harm done really.

However, people unpacked the politics behind peddling fizzy drinks.

In any case all these soft drinks are ensuring the entire humanity becoming diabetics so that the big Pharma Cos keep flourishing alongside! #CocaCola #Pepsi etc https://t.co/9P08OoqeHn

Need to change Branding method, at some point the press desk starting be a bar desk, messy and meaningless, three bottles half water bottle, phones, badge, trophy THEN the player/Coach. Also what the players are doing now will start to be popular and sometimes ridiculous (2/2).

As always any viral trend comes with its own set of memes.

Memes or not. People really appreciate Ronaldo for being a responsible influencer. How many celebs use their platform responsibly?

#CocaCola Then Vs Now 🥵 pic.twitter.com/VYsRcvrAKq

What do you think about Ronaldo’s move? Given the colossal influence, he demonstrated how will this change the market? Let us know in the comments below.