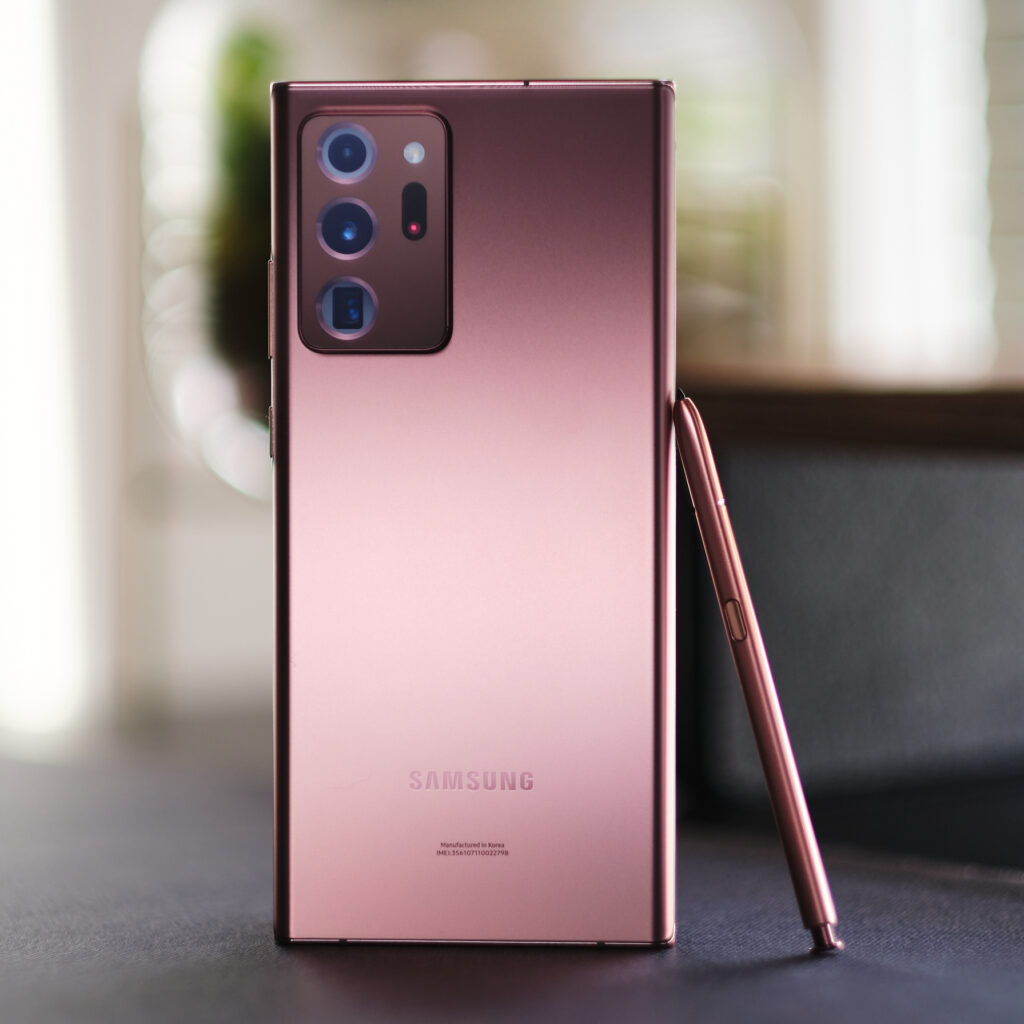 The Galaxy Note 20 Ultra is one of Samsung’s biggest flagship releases that made its way to the consumer market, during the second half of 2020. The phone is huge, it’s packed with features, it has a massive display & the pricing is sky-high. It clearly isn’t for everyone but for those who want the best of the best.

So, does it live up to its promise? Let’s find out.

The Note 20 Ultra is definitely an attractive looking phone that continues the sharp-edged design legacy of its predecessors but only in a more refined style. The device has a gentle-looking matte finish at the back, which doesn’t pick up fingerprints very easily. If you turn the phone around and you’ll be met with a massive screen with extremely thin bezels and a small centred punch-hole at the top of the phone.

Another new aesthetic touch is the bronze rings around the camera array at the back. They make the triple camera setup pop and it looks more elegant than the S20 Ultra.

Actually, on that note, the entire camera setup sticks out noticeably and if you’re prone to using your phone on a flat service you’ll notice the phone wobbles quite a bit so you might want to use a case for it.

The Note 20 Ultra has a large 6.9-inch screen which makes it the biggest Note to date. It’s a Dynamic AMOLED 2X panel which means you have the option of Quad HD resolution with an adaptive 120 Hz refresh rate that can be dialled down to 60 Hz depending on what you have on your screen. The refresh rate could certainly be improved here, given the hefty price tag. The display supports HDR10+ & the color output is as impressive & satisfying as you’ll expect from the latest Note smartphone.

The build here is nothing short of premium, the phone has a Gorilla Glass Victus on the front & the back, supported by a stainless steel frame. Victus scratches as easily as other models of Gorilla Glass, though hopefully, the scratches are less prominent. Of course, you can count on IP68 dust and water resistance here too.

Performance-wise the Galaxy Note 20 Ultra is one of the fastest Android phones around. Powering the device is an upgraded Exynos 990 chipset, which is based on the 7 nm framework. This makes the phone breeze through every task. The processor is paired with 8/12 GB of RAM and 256/512 GB of built-in storage, which is expandable using a microSD card here.

Samsung Galaxy Note 20 Ultra uses One UI on top of Android 10. If you’re switching from an older Galaxy phone you’ll find that it’s much cleaner & easier to navigate with one hand (thanks to one-handed mode). But if you’re upgrading from another device that has One UI 2.1, you won’t notice any major differences.

The phone also comes with some new Note focused improvements which you might find useful. The AI can read sloppy handwriting and you can do everything from annotating PDFs to bookmarking audio e.g. you can attach notes and time sync them to voice recordings of lectures. Notes are also linked to the cloud so they’ll sync automatically across all your devices including your Windows PCs.

You’ll find the stylus on the bottom left side of the Note. It has the same mystic colouring as the rest of the phone with a couple of upgrades. The stylus has AI point prediction which, coupled with the high refresh rate, makes everything you write and draw appear on the screen instantly. There are 5 new air gestures in addition to the old ones which Samsung is calling Anywhere Actions. As the name suggests they can work anywhere in the UI instead of being stuck to some particular apps.

The Note 20 Ultra has stereo speakers using the earpiece as a second channel. They’re not entirely identical in terms of output and the earpiece lags a bit in terms of loudness. There’s also the feature of wireless FM Radio on some versions of the phone, but it’s dying out across the industry so don’t expect it on future Note phones.

The phone has a 4500 mAh battery which is a bit smaller than the one on the S20 Ultra. Nevertheless, the Note 20 Ultra performs equally well & sometimes even better than the S20 Ultra due to software optimizations.

The Note 20 ultra has a triple camera setup which is different from what you’ll find on the S20 Ultra. The phablet’s camera array starts with a 108 MP wide camera, and it’s paired with a 12 MP ultra-wide camera with a 120-degree field of view. The 12 MP periscope telephoto lens delivers a 5x optical zoom and up to a 50x super-resolution zoom.

At 5X the periscope telephoto lens has a higher native zoom, than the 4X one of the S20 Ultra. As a result, the photos at the default 5X zoom are a bit sharper.

At night image quality from the main camera is impressive with a wide dynamic range, great details & good color saturation. Zooming with the periscope lens at night can be a bit of a hit or a miss. Night mode does a great job across the board by improving the details in highlights and shadows.

The selfie camera is 10 MP and has autofocus. It takes pretty good photos that seem noticeably improved over the ones from the Note 10 Plus.

The videos in the 4K resolution come out excellent from all three cameras. You can also shoot videos at 8K resolution from the main camera.

All in all, it is an impressive camera setup that delivers the camera performance of a flagship phone.

Despite being crowned as the best Note phone Samsung has released so far, the Note 20 Ultra is not a perfect phone!

While in every department the Note 20 Ultra packs quite the punch & if you want the ultimate smartphone with a stylus then there isn’t really any other phone to look at, even with this crazy price tag. However, if you’re not set on the S-Pen then the Galaxy S21 Ultra might be the Note’s biggest competition, being the newer phone from 2021 with better specs.

Like the Galaxy S20 Ultra, the Note 20 Ultra comes with an almost identical screen, an identical chipset and a comparable camera performance, especially in low light. However, with the S21 Ultra, you’ll be getting a significant price saving without a significantly hefty price tag not to mention an upgraded chipset, and better cameras.