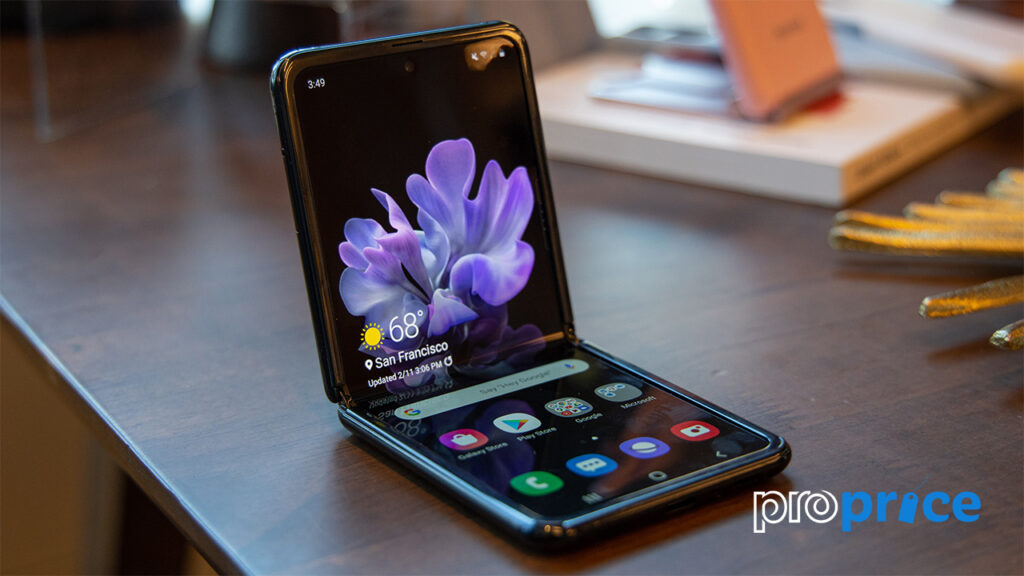 Samsung Galaxy Z Flip – Is it one of the most interesting phones in the world?

When you get it out of the box for the first time, you’re once again greeted with a similar warning from the original Galaxy Fold.

This may be the most fingerprint-magnet phone we’ve seen in the long time. The advantages of it being a glass screen seems to be really limited to the way it feels in the hand and under your finger. That’s definitely better than previous plastic folding phones, but that’s about it.

Arguably the biggest benefit of a clamshell foldable phone is that, when not in use, it’s half as tall. Considering the Galaxy Z Flip has a fairly massive 6.7-inch 21.9:9 display, the smaller form factor helps it fit in way more places.

Similar to the Moto Razr, there’s a front display on the lid. It’s a 1.1-inch OLED that shows basic information like time, notifications and media controls. Although it can be used as a mini viewfinder, there isn’t much you can do with it really.

The main display is a 6.7-inch Dynamic AMOLED screen with a 425ppi density. It looks good, feels good, but scratches pretty much ruin the experience within the first few weeks. Samsung introduced their screen-replacement program, probably because of this reason!

A lot of people compare the Galaxy Z Flip to a foldable S10e, and by most measures, that’s what it feels like. Powered by a Snapdragon 855+ chipset with 8GB RAM and 256GB UFS 3.0 storage, the Z Flip has all the flagship guts to overshadow what flaws we notice with the design.

As you would expect, performance is top-notch. Interface is seamless, gaming made easy, multitasking is fun, and there’s no overheating.

The Galaxy Z Flip packs a 3300mAh battery. Pretty much a standard battery with limited power capacity that supports 5 hours of screen time on average.

The punch-hole cutout on the main screen houses a 10MP selfie camera. It has good sharpness, a nice wide-mode and a cropped-mode if you want more people in your selfies.

If you’re a flip-savy enthusiast and want to decide between a Z Flip or Razr, go for Samsung. The Galaxy Z Flip series definitely has a leg-up on the folding mechanism, and the hardware is good.

Be a little real about this; folding phones don’t sport a universal display that’s scratch-proof. The risk is on you. We love the phone, but honestly, we DO NOT recommend it.