Earlier this month, Senate’s standing committee on Telecom Affairs had asked Pakistan Telecommunication Authority to block all unregistered SIMs by May 22, 2008. However, with only one day left…PTA has managed to block only 1.4 million unregistered SIMs.

Reported here, Daily time quotes Khurram Mehran, Public Relations Deputy Director PTA, that the deadline was not set on practical grounds and Standing Committee did not consult PTA before setting this deadline. ‘Daily Times’ says that the deadline for blocking all un-registered SIMs is likely to be not met by PTA and cellular companies of Pakistan.

Years back, Pakistan Telecommunication Authority was warned by many sources, including press reports, regarding the rising issue of un-registered SIMs, but authority did not take any action against cellular companies. On other hands, seems like cellular companies of Pakistan were in race of adding maximum number of cellular subscribers, without fearing the data and ownership of Mobile connections sold.
The race for registering customers began when the activation tax per SIM was lowered to Rs. 500, which was as much as Rs. 3,000 before. Cellular companies opted to give almost Rs. 400 per SIM to government but they never stopped in selling the illegal and mostly in-active SIMs.

This actually helped companies in raising their stock values, for example, Mobilink the subsidiary of Orascom could have different stock value if there customers were 15 million, which are now reported as 31 million. We saw the substantial rise in value of Warid Telecom, which sold its 30 percent shares to Singtel for US 758 Million dollars.

PTA, allegedly, had understanding with cellular companies for allowing them to sell SIMs without any procedures; un-confirmed sources have said that PTA was in an un-disclosed deal with telco operators. That is why cellular companies are now looking at PTA to protect them from blocking their millions of SIMs. 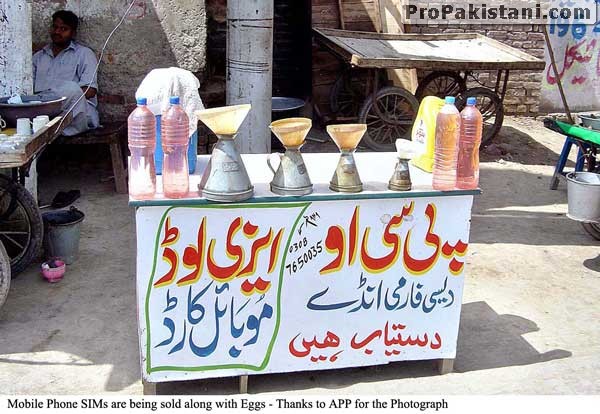 How PTA will cap the Sale of SIMs on such stalls??