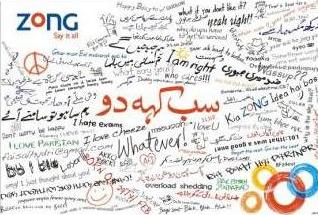 Professor John Lee of Perth University, once during his lectures told us that in advertising it is important that what you want to say should be simple and clear …rather then in a difficult and un-clear way. People might be very impressive with high beat music and the lyrics of your ad but if the message is not clear then you have to re-think your campaign.

Early this year through its launch campaign, Zong introduced a new and simple way of advertising i.e. direct and simple message with the spice of taunting competitors. The big guns of advertising were only criticizing that the approach was a copy. After first ad, another ad came with some more thoughtful thinking of just hitting other companies for telling a lie on the matter of first minute charges.

Despite the criticism it received, everyone will accept that these two early campaigns changed the course of telecom advertising in Pakistan.

After almost one year, if we analyze the advertising campaigns in Pakistan now it is evident that most of the companies are following the footsteps of Zong with simple TVCs. For instant, Mobilink is airing a TVC which says, “ager wo call nahi kerta to kiya howa, main kar longi”….. All 3 characters follow the same style of talking which was introduced by Zong.

If we remember, Mobilink excessively used celebrities in their TVCs including cricket star Wasim Akram, Film star Shan and Veneeza Ahemd and many other big personalities.

One of the biggest changes we noted was with Telenor’s advertising, which had a jingle approach with beautiful voice of Ali Zafer swinging with in the arms of Aminha Haq. Although jingles left good impact then, but were clean bold by the advertising campaigns of the Zong. So they had to leave the trend and adopt the way Zong has shown all the other players. Now, at this time, Telenor Pakistan is also delivering the same philosophy of Telenor talk shawk…”Aik connection chiay”

And by the way, this talky approach by Zong can be felt in other industries as well.

It is very much clear that these two leading companies changed their jingle approach to simple message based TVCs.

By the way, Ufone may soon think of off beating Faisal Qureshi to hire a new team with serious business effort rather than just making jokes; furthermore, Warid has also changed their advertising agency.