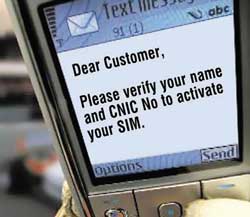 These days, new SIM verification system is on top of all other news in Pakistan’s telecom industry. Everyone is calculating his/her expected benefit and loss due to this new SIM verification system for his/her business on individual and collective (Company Wide) basis. Though, it is sure that this new system is going to impact sales and resultantly the revenues, however, we need to critically analyze the benefits, compromises and expected losses in order to re-sketch sale and revenue generating strategies for cellular companies.

I know many people are of opinion that sales will go down sharply after the evolution of new system – I agree, but not fully, with a logic that involving more steps for getting a new connection will for sure hinder the way for higher sales, but at the same time I believe that no one can stop genuine users from getting their connections. So the point is that sales may not go down in real, but yes we may come across actual and legitimate sale figures. Legally we can’t say that we don’t have legitimate sales’ figures, but everyone will second me that we have lesser amount of cellular users in country than the official reports by PTA.

Hence, if we see sales going down, don’t worry at all because that would be normal, very natural and true depiction of legitimate users. However, in case of see un-usual slow down in sales, we will have to calculate the impact of overall economic down time as well. Of-course this is going to be a test for cellular companies.

Same is the case with revenues; they won’t go down too, because they come from active users only. It is a matter of fact that we may see increased ARPU in coming days due to higher ratio of active SIMs.

New system has added more overhead for cellular companies, this is the only thing I find fearful for them. This overhead will not only add more operating expenses, but these call centers agents will be directly responsible for bringing in sales with effective and maintained services.

I hope we will not see delays in SIM activations, even if they are activated properly, this would be a must do thing now to process application forms (called Cellular Services Agreement Form) with thumb impression for each SIM to match the record. For this, we will have to compromise with the livelihood of those remaining hawkers, outlets, PCOs who used to sell SIMs without much documentation. By the way Geo News has already reported that retailers are already selling SIMs without documentation and customers find problems due to unawareness of new system.

Launch of New SIM Verification system for new connections has got PTA another milestone to profile about in coming annual and quarterly reports, which is of course an achievement. And the good thing about the execution of system was that everything went under schedule; though we saw implementation policies and agreements between cellular companies and NADRA coming little late, but otherwise thumbs up for PTA.

SIM verification system has not pleased infrastructure vendors, as this process has taken plentiful time of regulator and cellular companies, when network vendors were expecting 3G game play in the country. But I am sure that PTA will now turn its attentions towards next hot topic, that’s BIG 3G.