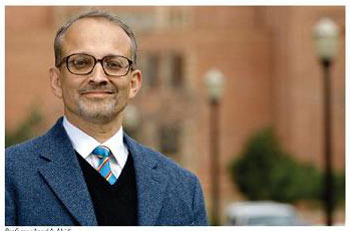 This is the first part of a series where I will be profiling eminent Pakistani scientists who have contributed immensely towards innovation in the fields of Telecommunication, IT and Computer Engineering.

Dr. Asad Abidi is an IEEE Fellow who is renown worldwide for his work in the field of RM-CMOS.  He has the honour of being a Member of the prestigious National Academy of Engineering, the highest professional lifetime distinction accorded to American engineers. He is a recipient of the 2008 IEEE Donald O. Pederson Award in Solid State Circuits and the 1997 IEEE Donald G. Fink Award, the 1997 ISSCC Jack Raper Outstanding Technology Directions Paper Award, the IEEE Millennium Medal, and was named a top-ten author by the ISSCC. The UCLA Henry Samueli School of Engineering and Applied Science recognized him in 2007 with the Lockheed-Martin Award for Excellence in Teaching. Dr. Abidi was the Program Secretary for the International Solid-State Circuits Conference from 1984 to 1990, and General Chairman of the Symposium on VLSI Circuits in 1992. He was Secretary of the IEEE Solid-state Circuits Council from 1990 to 1991. From 1992 to 1995, he was Editor of the IEEE Journal of Solid-State Circuits.

RF-CMOS is the technology that enabled the wireless revolution in the 1990s. Products incorporating emerging standards such as 802.11 (Wi-fi), Bluetooth and fiber optic applications need high-performance and reliable manufacturing solutions based on RF CMOS. RF-CMOS allows the use of sophisticated modulation/demodulation schemes and algorithms, high quality error detection and correction systems, resulting in high performance, lossless digital communication channels.

As the first Dean of LUMS School of Science & Engineering, he has contributed immensely in setting up an institute of international standards in our country, with a faculty any institute can be proud of. He oversaw the school’s transition to what is hoped will be a world-class interdisciplinary facility that will introduce a culture of research and entrepreneurship to a new generation of engineering and science students He returned last year to UCLA to continue his research.

Asad A. Abidi received the B.Sc. (Hons) degree from Imperial College, London, U.K. in 1976. He then received his M.S. and Ph.D. degrees in Electrical Engineering from the University of California, Berkeley, in 1978 and 1981.

Professor Abidi’s research interests are focused on the technology of RF-CMOS integrated circuits, including development of a single chip 900 MHz transceiver for frequency-hopped, spread spectrum communications at data rates of up to 160 kb/s. The mixed analog/digital transceiver, implemented in a standard CMOS process, encompasses all the functions between antenna and the baseband signal processing. Today, the radio transceivers for all wireless networking devices and for the new generation of Mobile Phones are all mass produced as RF-CMOS devices.

He worked at Bell Laboratories, Murray Hill, NJ from 1982 to 1985. During these years much of the basic technology of submicron MOS VLSI was being developed there in the Advanced LSI Development Lab. In 1989, he worked as a Visiting Researcher at Hewlett-Packard Laboratories to investigate A/D conversion at ultrahigh speeds.

In the mid 1990s, mobiles and other forms of wireless communication entered widespread use and they led to an era of untethered computers networked with wireless devices. Mobiles required low power circuits and systems to conserve battery life, miniaturization of antennas and the challenges of transmitting high data rates over unpredictable wireless channels. The RF circuits in the mobile telephones of early days were comprised mainly of discrete circuits with a mix of technologies. Dr. Abidi’s research with his graduate students at UCLA was among the earliest to recognize how single-chip integration would bring about miniaturization, thus lowering power, and adding sophistication and adaptive functionality to radios in mobile devices.

The newest generation of RF-CMOS circuits is so much shaped by digital paradigms that much of the analog portion of the receiver uses discrete-time multi-rate signal processing, while in the transmitter, which is today all-digital, analog waveforms appear only at the power amplifier’s output that drives the antenna.

It is as a result of these advances in RF-CMOS that a new paradigm of radio devices is taking practical form. SDR (Software Defined Radio) which is bringing to a conclusion the long-standing quest for a universal radio device which tunes, or transmits, any channel carrying any modulated waveform in any radio band.

He is currently teaching as a Professor at UCLA. The UCLA Henry Samueli School of Engineering and Applied Science is ranked among the top 10 engineering schools at public universities in the USA. The school is home to six multimillion-dollar interdisciplinary research centres in space exploration, wireless sensor systems, nanotechnology, nanomanufacturing and nanoelectronics.