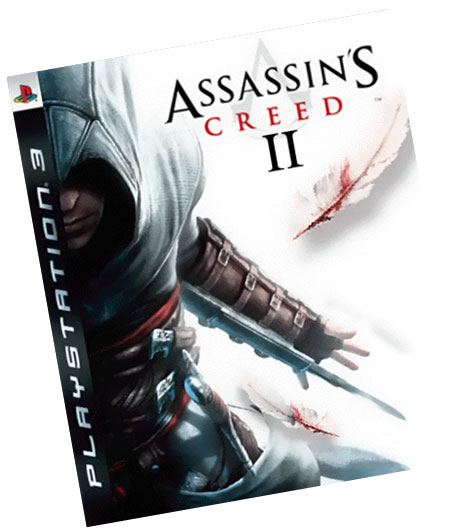 No doubt Assassin’s creed 1 was a master stroke by UBI and myself is a great fan of Assassins creed 1. I really loved it and the good news for Assassins creed’s fans is, that UBISOFT is going to launch, Assassins Creed II in November – game is second part of UBI’s one of the best ever games called Assassins creed,

Assassin’s creed II is a sandbox-style-action adventure game which is developed by UBI Montreal and will be published by Ubisoft On 17th November 2009. Game is going to be released on WINDOWS (PC), PlayStation 3 and XBOX 360.

Assassins Creed II starts exactly where Assassins Creed 1 was ended, Game is set in ITALY in 15th century and storyline is about vengeance, Main character is called Ezio Auditore di Firenze – who is a young man turned into a Assassin because his father was killed and now has turned himself as an Assassin to get revenge from his rival families who killed his father.

As we have seen in previous story of the game that Altair has been sent back in time, where he find his ancestors of Desmond Miles and he is the bar tender of this modern era. He has been captured by Abstergo. This time he is showing himself to brandish two hidden blades. One of it is a secret gun which shoots a spherical bullet with Assassins’ crest on it.

This is year 1486 after the two hundred and ninety five years of the previous tale. These all characters that have been used are taken from the ancient history. Like it includes, Leonardo Di Vinci, Niccolò Machiavelli, Caterina Sforza, and Lorenzo de’ Medici. This time the character is going to be Ezio, and unlike Altair as in previous version of the game, he has a wedding ring. Also he has many advance skills this time

In an open ended game play there are allots of new changes in game which are mind blowing. Leonardo Di Vinci ‘s flying machine is an interesting weapon in the game Health system has been made more efficient then the previous game.  30 weapons will be introduced in the version including halberds, axes, long pikes, swords, daggers and others, there are two more weapons which are new and very impressive 1st one is Double hidden blades and 2nd one is smoke bombs with help of these bombs you will be able to hide and run from enemies, new weapons can be unlocked in only PlayStation 3 if it is connected with PSP and player can snatch the weapons of enemy and can use against them.

Ezio is being provided by a gun which throws blade to its target from his Wrist. Player now can use water as a hiding spot and can cover the distance by swimming. Player can decrease his wanted level by giving bribe and removing its wanted posters. Player can also use money to buy tools and weapons. This time day and night system has been added into the game. Ezio can kill the guards before detection; hiding spots are also not so safe as they were in A.C 1. Well I must say that Assasins Creed 2 will rock. And allots of people including me are Dying to play this game.