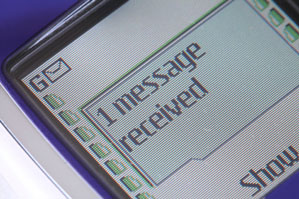 Not now, but two years ago or so we saw increasing trend of SMS advertising. To be exact, it was November 2006 when SMS advertising was born in Pakistan, thanks to Warid’s Zoom package.

Warid is pioneer in offering SMS packages with two options; one of them was unlimited SMS’s a day for Rs. 7 plus taxes. This package was sensed as an opportunity by advertisers and they started sending bulk text messages. These advertising companies used to charge 15 to 25 paisas per SMS, and started this channel as a advertising business.

By the way, SMS advertisers used multiple Mobile Phones attached with computer, through USB or serial cables. These phones (could be 100 at a time) were then managed by specialized applications installed on computer to send messages to list of hundreds of thousands of mobile numbers.

Soon Warid realized that their network is being spammed by advertisers, especially when network was jammed due to 2 million advertising SMS a day (as per estimates); Warid capped its unlimited SMS package with maximum limit of 250 SMS a day.

This confinement didn’t stop SMS advertisers, who remained in search of SMS packages that offered unlimited SMS. Then was the Paktel postpaid, that had unlimited SMS per month for a fixed monthly rental of Rs. 1,500, which turned out to be a treat for advertisers, as Paktel’s network had no traffic then (it was nearing its sale out), resultantly Paktel offered high level of satisfaction for SMS delivery to advertisers.

After China Mobile acquired Paktel, they seized all postpaid packages, and thus the offer was taken back. This was the time, when other companies started offering huge amount of text messages at a fixed price, but with a limit. For instance, Telenor offered 10,000 SMS for Rs. 150 in early 2008, and so did the Ufone.

With all these packages, SMS advertisers were never short of options for sending text messages at very low prices; however revenues kept on decreasing due to increasing competition and price war amongst the SMS advertisers  themselves. Per SMS rate fell down to 5 Paisas which was once 20 to 25 paisas.

Eventually, we saw majority of SMS advertisers dying in late 2008 due to this price war and low return.

Currently, we don’t see many SMS ads; however, there are few exceptions that are operating even now.

Now at this point of time, when conventional SMS advertisers have given up, cellular companies are engaging into this business by sending advertisements through SMS to their subscribers. In fact I just received Coke Studio SMS on my Ufone number.

Even though it is SPAM, but we will have to bear it, as my operator thinks this message can be of benefit to me.