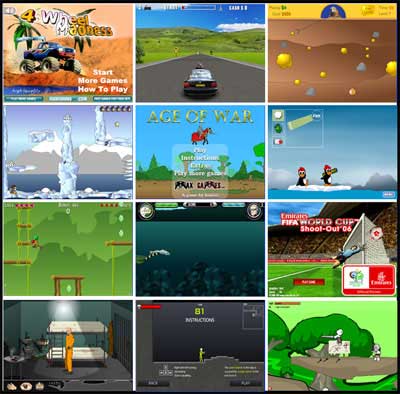 In the current age of digital revolution one can never get bored. There are 100s of things to do online such as blogging to watching videos, sending emails to reading interesting articles, you name it and you have it. Out of all these entertainment channels, free games are one of the most popular.

There are hundreds of thousands of users who play small flash games online every day, it is one great way of killing the free time, well, that is the prejudice an average joe has regarding flash games, however, scientists have conducted several studies and surveys and figured such games actually stimulate brain, there are several games which require a lot of thinking, quick response and concentration. This all eventually helps in growth of brain.

There are several genres of games ranging from Puzzle, Racing, Strategy, Arcade, Dressup, Shooting, Action, Sports, Quiz, Kids. Quizzes, Puzzles and other Kids related games which help kids learn several things and boost their confidence. These games are more of a fun if it allows users to play and compete online with their friends.

It is fun to play flash games, however, it requires a lot of skills to develop such games, lot of creativity to come up with a unique game idea, which is equally good and capable of retaining user’s attention. Flash games are widely sold for hefty prices depending upon their graphics, usability interest retention factors. It is a win win situation for both developers, and buyers, users enjoy for free. Developers would get a decent price for their efforts and buyer would earn a nice profit on it by publishing the game on targeted website.

Flash games are not only popular with kids but adults play them as well to remove their stress. Some websites allow users to download these games so in case if the user doesn’t has internet access at some point, he or she can play games to kill the boredom offline too. If you feel like playing and downloading some games, I would recommend you to look up for games like Call of Duty, Commando 2, Alpha Bravo Charlie, Club Penguin, Max Speed, Our World, Magic Pen 2 and Heli Attack.

I would like to conclude with mentioning some of the benefits which one can get from playing flash games. These games help you learn on how to coordinate with your own body parts such as eyes coordination with your hands, it is one of the great channels for hyper kids to assert their efforts into something which would eventually help them learn something beneficial. It is a great source of building and maintaining attention, it inspires users to pay attention to several other things in their lives. Puzzle and Quiz games are targeted towards building knowledge base to individuals; one of the great benefits could be the generation of new ideas and taking things in broader perspective. There are games which instigate brain to think of relative strategies to beat up rivals.

I would like to assume that if parents participate in playing with their games, it would not only bring a lot of fun but also be a reason to a strong family bond amongst siblings and parents.