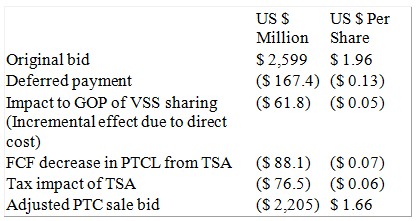 Sale of 26 percent shares of PTCL has turned out to be the most ambiguous financial deal ever carried out in national history. Important documents relating to the said deal, which include ‘Summary for the Cabinet Committee on Privatization of PTCL’ and the agreed ‘Agreement of PTCL’s Sale’, revealed shocking hidden truths of this sale out. It is wondered why the agreement pertaining conclusion and decisions were not made public, while they are of immense national interest.

Cabinet Committee on Privatization approved EIP offering the highest bid of US $ 1.96 per share, as the successful bidders. The price offered by China Mobile was US$1.409 billion and SingTel was US$1.167 billion. Thereafter the first installment of 10% of the bid price was paid and the SPA (Share Purchase Agreement) was signed on June 30 2005.

The SPA lapsed and legally terminated in September, 2005 as EIP could not pay the balance amount within the prescribed period.

However the interesting observation is that Government of Pakistan did not grab the earnest money of US 40 million dollars. Instead series of meetings were held between EIP and GOP officials in February/March 2006 and pressure for additional concession and modification of earlier agreement was exerted. As a result, various concessions and changes in first agreed SPA & SA were signed between Pakistani Government and EIP on 12.03.2006 and the management of PTCL (including its group Companies, i.e., PTML and Paknet) were transferred to EIP.

Signing of SPA and SA was not in accordance with the terms and condition of public offering given through advertisement and competitive bidding process as they were carried out secretly.

After having a close look up of agreed decision and after the termination of first SPA, it reveals that government of Pakistan gave significant direct benefits to the buyer immediately and the conferred financial benefit over the period of its operation. Major concession is that sale price staggered over a longer period. Against the accepted bid of US $ 2.599 billion, the EIP was allowed to make delayed upfront payment of US $ 1.4 billion including earnest money and first installment. Balance amount to be paid over nine semi annual installments in a “pay as you earn” model.

The impact of other concessions like sharing the burden of Golden Handshake scheme, which would be granted to only 20,000 employees, with government of Pakistan (mentioned in element 3 of Agreed Agreement) and allowing enhanced rate for payment of Technical Fee to the Etisalat, etc., have been worked out by the relevant authorities.

Difference between the original bid price and the adjusted bid price comes to US $ 394 million (or Rs. 23.64 billion) which was a sweet gift for Etisalat and a direct loss to the government exchequer.

Sale of 26 percent of PTCL shares was a matter of national concern. Reconsidered agreement involved compromises which would cost heavy harms towards the national asset. Impact of these concessions cannot be easily quantified but their financial nature indicates why the buyer negotiated so hard to get them.

This concession grants un-competitive advantage to EIP for future purchase of 25% “A” Shares of PTCL in which no telecom company would be able to participate. EIP with its first right of refusal can easily manipulate the next bidding process to its advantage resulting in a very low bid price of additional 25% shares of PTCL. The transaction is therefore outcome of a process reflecting serious violation of law and gross irregularities with regard to sale of the highest profit-earning State-owned company.

Official response of government is that total amount receivable would still be US $ 2.599 billion without disclosing that this would not be in one go as originally envisaged but over a period of 5 years which reduces the effective price on the basis of present value analysis. EIP was given unique advantage for paying the remaining amount on “pay as you earn” model.

Permissions granted to EIP, after the purchase of 26 percent shares, to fully control the management, which is against the provisions of Companies Ordinance, 1984.

PTCL sources have confirmed that no Comprehensive Value Assessment was carried out before the sale of company’s share. Sources told that the value of assets was calculated from historical book instead of Market Value of Nation’s assets, which obviously counts the difference in billions of dollars.

The sale PTCL’s 26 percent shares can be closely related with Steel Mills of Pakistan case. It merits mentioning here that sale of Steel mills was declared void because numerous concessions had been granted after the bidder had been selected.

A CEO of cellular company while speaking to us said that the deal involves misjudgment of asset valuation. He further said that 26 percent shares of PTCL were handed over in only 2.6 billion dollars, which included PMTL (Ufone) and paknet as well. He was of a view that a very careful estimate suggests that Ufone worth more than US 6 billion dollars.

It is to be noted that a petition has been filled in Supreme Court, and is waiting for hearing, that challenges the sale of 26 percent shares of PTCL. Mr. Shaukat Aziz Siddiqui accused the sale of 26 percent shares as illegal, unprecedented, unlawful and of no legal effect. In the response to Presidential Reference against Chief Justice, Justice Mr. Iftekhar Chaudary, he had said that he was facing pressure over the PTCL’s privatization case as well.

After a deep look at final “Agreed Agreement” summary presented to Cabinet Committee on Privatization and the copy of petition filed in Supreme Court, one can depict the story as very confusing. Supreme Court of Pakistan may solve this ambiguity that why the Government of Pakistan gifted the most valuable asset of Pakistan to Etisalat, on all the conditions that were set by Etisalat.

Note: This story has been prepared while keeping in view the history events, and through following references. All facts and figures are carried from the references, which are as following,