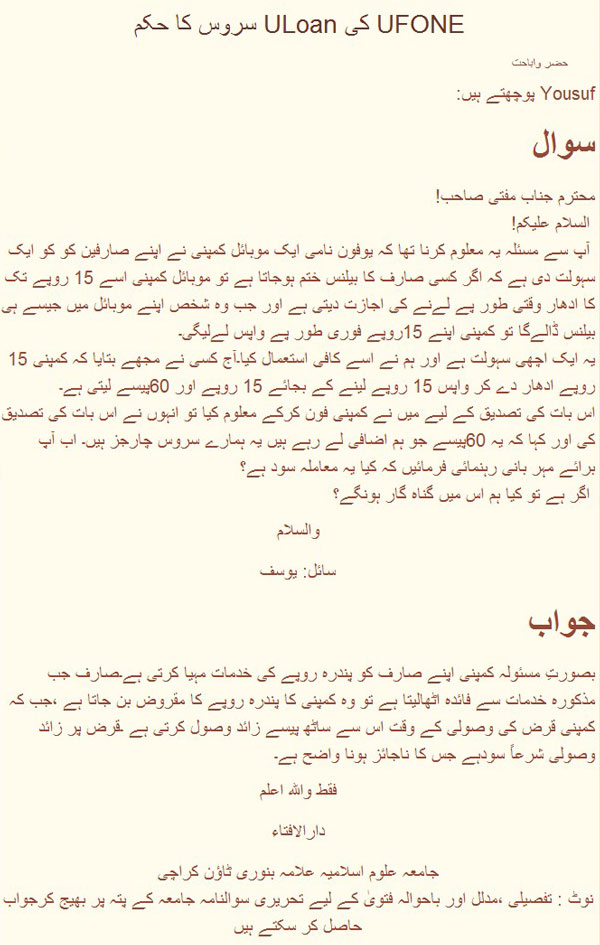 Ufone has a service for its prepay customers named ULoan. Under this service, Ufone started giving Rs. 15 advance balance so its customers can enjoy uninterrupted communication, in case they run out of balance. Customers can later on pay-back this loan on card recharge.

Since last couple of weeks, Ufone’s customers started complaining about the additional transaction charges which were being applied on the ULoan service. Customers have started sending messages saying that the extra charges which Ufone is taking is actually Interest (Suud), which is Prohibited (Haram) in Islam, alarming people to stop using Uloan as it is propagating Haram thing among the public.

If you check out ULoan’s details, it is clearly mentioned that transaction charges of Rs. 0.50 will be applied. It’s a general notion that we don’t give much emphasis to the terms and conditions of any service. So, we can’t say how many people read the details before using this service.

To clear this confusion we contacted Ufone and asked for their viewpoint, which is given below:

It is absolutely clear that any charges deducted on Uloan cannot be classified as interest. Interest in any circumstances means that it has a compound effect and it multiples with time. Also those who fail to pay are penalized with extra charges in all the interest based products.

In the case of ULoan the customer has to pay onetime fixed charges. These charges remain the same whether the customer reloads the account after a month or after four months. There are also no penalty charges for not reloading in a fixed time period. These charges on ULoan are simply a transaction fee. All other cellular operators also charge for different services where amounts are transferred either from the company or even between the customers themselves.

It is unfortunate that a product that has utility for millions of customers and is an industry trend setter has been targeted with baseless propaganda.

On the other hand, an Aalim of Jamia Aloom-e-Islamia, Banori Town, Karachi said that the extra charges which Ufone is taking is clearly Interest (Sood) which is Prohibited (Haram) in our religion. Check out the below screenshot (Taken from official website of Jamia Aloom e Islamia):

It merits mentioning here that Mobilink also has a similar service named Jazz Advance under which Rs. 5 advance balance is given to the customers. But Jazz only charges back Rs. 5, no transaction charges are applied to utilize this service.You can check out Jazz Advance details at here.

I won’t conclude anything here. It’s upto you guys to decide what’s the reality behind all this. Is Ufone actually taking Interest or it’s just an attempt to damage Ufone’s Brand image.