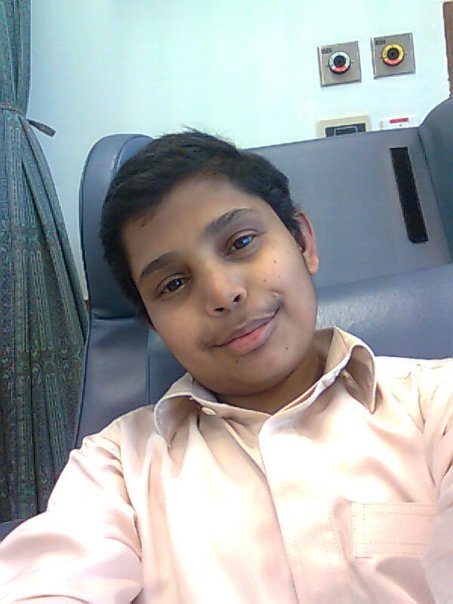 Salman Mehmood, 24, a close friend of mine, a fellow blogger, an entrepreneur, a person behind a great cause of fighting against thalassemia and a great web developer embraced death today around 1 PM in the noon due to meningitis leaving all the bloggers and tweeters trembled with sadness.

Salman Mehmood was a very simple, modest and pious person. He would just help everyone all the time with his all time favorite phrase “just keep the wheel rolling” by which he meant just keep helping others. Salman was thalassemia major patient since his birth. When he was a kid, he lost his brother Nouman, it was then he promised with himself that he will do anything and everything to minimize thalassemia and to aware people of the dreadful disease. With this cause in his mind he started FAiTH (Fight AgaInst THalassemia). He was always on the move to educate people of the disease and to collect blood for the affected patients. With his cause he was featured on a TV show, where he spreaded the word about fighting against thalassemia. Check out clip of that show below:

When he did his matriculation, the pain got badly to him and he couldn’t attend college. He had to spend a lot of time with pain in hospitals. He would just read html tutorials to divert his attention from the pain. He extended his knowledge to other web languages and with that he became a great self taught web developer. He started working freelance on sites like rentacoder where he is rated as 9.9 out of 10 just because he couldn’t complete his one project because he was hospitalized. After gaining sufficient experience, he decided to move on from freelance work and get a job. He started working online full time for one of his freelance clients in a US based company called “Directors Advantage”. Till date, Salman was one of the best web developers I came across and at such a young age he already had PHP experience of over 8 years. He would offer his free PHP help to all his friends, fellow bloggers and tweeters but may be that didn’t just satisfy Salman’s big heart and he extended his free helping services to everyone on this earth. With his blog Iwritealot he offered his helping hand to everyone who may submit their faulty pages to him, so, he may correct the code.

He would offer his free PHP help to all his friends, fellow bloggers and twitterers but may be that didn’t just satisfy Salman’s big heart and he extended his free helping services to everyone on this earth. With his blog Iwritealot he offered his helping hand to everyone who may submit their faulty pages to him, so, he may correct the code.

I met Salman for the first time on 20th of January 2009 on a forum where I reached for some PHP help. He simply asked me the name of the plugin I needed help with and sent me the working version of it. After that I and Salman became good friends. We would just chat and gossip all night long whenever he was free from his work. In these ten months, Salman helped me with my blog and even my personal PHP projects, endless number of times. Even though Salman was a great professional with decent living and salary, he always wanted to complete his college and so, he gave his exams this year.

Salman is one of the best persons I ever met in my life and his death has left me all broken. He was so wonderful that he will always stay in my memories and I will never forget him. His sister, Ayesha has been really brave all this time and kept us all updated about Salman’s condition. May Allah give her and her family enough courage and patience to bear the loss. I have enough belief in Allah that he will be granted heaven for all the good deeds he did. May Allah bless him and give him peace. I request you all to pray for his soul, so, that he gets peace forever.

His Janazah prayer will be held today at Garden West, Karachi after Namaz-e-Maghrib.

ProPakistani Team offers heartily condolences to his family and friends. May his soul rest in peace.