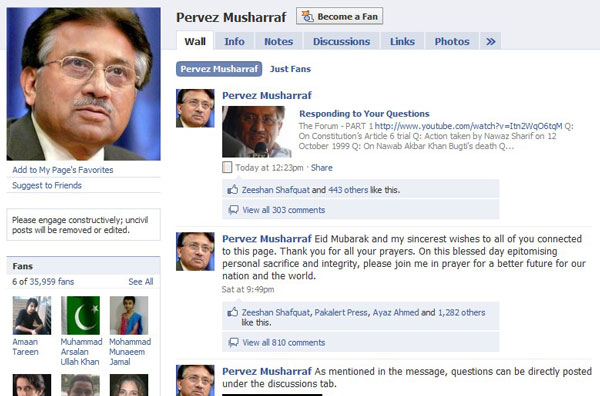 Do you know that former President of Pakistan Gen (Retd) Pervez Musharraf created a Facebook page just a month ago and he has collected 36,000 fans during this period?

This is no doubt, the most successful Facebook campaign by any politician in Pakistan, which is apparently backed by social media experts.

First of all page ad is very powerful and appealing, that is one reason of success of this campaign – but the most important thing is that Mr. Musharraf interacts directly with fans, makes videos especially for Facebook, answers questions himself and lot more.

This campaign can be taken as a case study and as an inspiration for not only the political parties but the businesses in Pakistan. This Facebook page by Pervez Musharraf reveals the potential that Facebook has for celebrities and corporations.

So if you have got a Facebook page, study this campaign closely – and try to follow what Musharraf has done. Not to forget, don’t expect this much, because he had been the president of Pakistan, while you are not. But you can better your results to some extent by following him.