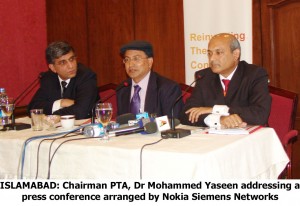 Pakistan Telecommunication Authority (PTA) is closely working with State Bank of Pakistan (SBP) on the draft of “Third Party Mobile Banking Regulations” which will be finalized soon. Once finalized, it will connect all banks of the country with cellular mobile operators for mobile transactions. It was said by Chairman PTA, Dr. Mohammed Yaseen while addressing to a press conference held here today by Nokia Siemens Networks.

Chairman PTA said that the primary objective of this collaboration is to develop a unified regulatory framework to facilitate the customers of telecom and banking sectors both at a time, since mobile banking involves both financial institutes and mobile phone operators.

He said that the telecom sector of Pakistan has shown phenomenal growth in the past few years which has resulted in the expansion of subscriber base and it has also opened up new doors of business opportunities in the telecom sector.
He said that currently Pakistan has overall 63% teledensity while it has great potential for broadband proliferation. Presently there are around 5 lakh broadband subscribers in Pakistan. The broadband subscriber base has grown by 146% in the last fiscal year. He said that it is for the first time that broadband connection charges for 1Mbps connection has dropped below Rs.1000/- providing unusual incentive to new broadband customers.

In response to a question about 3G Services, he said that Ministry of Information Technology and Telecom (MoIT & T) is working on the Policy for 3G licensing. PTA has completed ground work and would initiate the licensing process soon after it receives policy from the MoIT & T.

While commenting on the study named “Connectivity Scorecard 2009” commissioned by Nokia Siemens Networks and written by Professor Waverman, fellow of the London Business School and the consulting group LECG, Dr. Yaseen said that it is always important to have a reference point in order to measure the growth, performance and to enhance the working strategies of any sector.

He emphasized on the need and importance of local content and applications for information and communication sectors of Pakistan. He said that PTA is trying to motivate current telecom market players to focus on this aspect of the telecom sector to take maximum advantage of the given opportunities. He quoted the example of Bangladesh where BBC has recently launched English learning mobile application which is very popular within the masses. He said that Pakistan also needs such applications with local content especially in the fields of Education and Agriculture. He said that Pakistan’s telecom sector was ranked at top levels in different categories in several studies carried out by international telecom organizations.