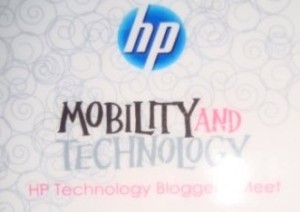 Last Week, HP conducted a bloggers meetup in three cities of Pakistan, Lahore, Karachi and Islamabad. The intention of the event was to bring the bloggers community on platform where they can help teach HP that how can they reach online masses in Pakistan successfully. HP gave ample time to people to register for the event. Long and short, I went in (for Islamabad gathering).

Fella Blaggars did left us with some Hot & Sour Taste when they showed up late in the session, not that late though – but still they were behind the schedule. As soon as ample people were there, the event started with Mr. Khalid introducing the crew.Crew of the ship was :

Khalid started with telling us all that HP is about to introduce HP mini (a netbook) in Pakistan and they are happy to engage bloggers community in the launch. So happy, Sire!! Then he placed “Blogs or Social Media?“as a question in all our plates. Here some of us rose the forks and knives. Time for some kill.

As soon as the question was raised, answers started coming out from nick and corner. I won’t take the names here cause rest of the bloggers will feel to be left out. So, bloggers gave their thorough view point that what they really think about blog and social platforms.

Discussion was getting hot and was going in the direction (amazingly!!) . Bloggers had their opinion that with social media, they can reach the masses. But by using blog, an individual or company can only give/spread out information, where hundreds or even thousands following it – While social media, for instance Facebook or twitter are more of communication tools. Agreed!!

It was further discussed that how a company can build a brand through bunch of blogging and social media. Case studies of Dell, Apple, IBM, Microsoft, Nokia were discussed and how they plan their branding and sales through blogs, Facebook and Twitter.

Discussion was taking to-and-fro motion between social media and use of blog. As soon as the the tug of war ended, Khalid dropped another topping on the meal which was “How can bloggers help HP?”

Lustrous as it looks, everyone had one thing on mind as I got this feeling from the smirky looks and that thing was “Do Paid Reviews” :D Jokes apart, guys and guls had their share of expression by telling HP team that they should do similar kind of meetups before launch and relevant bloggers will write about the product and that’s how online Pakistanis will get to know more.

Discussion was worth listening as most of the bloggers had their own blogs and they were productive enough in spreading knowledge with their experience. Once the discussion got to the noble end, Khalid burped “Time for HP mini” : – ) But by that time most of the guys were exhausted and they wanted some break. Khalid gave all of them mouth water effect by announcing “TEA BREAK” : – )

Tea break was good as always so there is nothing to write about Dahi Bhalay and Chaat : – )

Once the roaring rats settled down, Khalid presented us with his special for the evening “HP Mini”. Now, I am dying to write about its Pros and Cons here but I thought of writing a special post on HP mini only. So, I m leaving the Chef’s Special with empty space and a spoiler for you from next post,” Its Worth Buying” :)

There were none as such. We had all the sweetness. But there were two, minor ones. The team showed HP mini 110-1119TU and 110-1120TU but we in Islamabad didn’t had the privilege of having the looks of 110-1121TU which is having designer made Top Cover.

Khalid did mentioned that they don’t have this specific model around here. They should have brought it as they have showed the interview of Tord,the designer of specific HP mini netbook. Another glitch was that they showed HP mini 1119TU and 1120TU but they gave us the price list of 1006TU, 1040TU and 1121TU. Price lists should have been there for the present netbooks only.

It was wonderful evening in all with knowing some of the new faces on bloggers platform. HP team didn’t let us down either. Khalid had all the sweats of the life on his forehead that very night, but he took all the bloggers with him on the smooth drive.

Stay tuned for the next episode on HP Mini NETBOOK.

Here are some of pictures, courtesy Zunnurain Khalid