Power over Ethernet or PoE as it is more commonly known; is progressively establishing its name as ‘The universal power socket’. The term didn’t quite actually moved me until a couple of weeks back, when I bought a wireless broadband connection, for which the operating company handed me over an outdoor CPE (CPEo) and dispatched a field engineering team to install it.

Apparently, the roof mounted device is fed only by one single Ethernet cable but no power cord. Reason? Yes ! the device features an active PoE solution. And today not only a broadband CPE, but any device connected to the network through an Ethernet cable can eliminate the need of a separate AC/DC power adapter, and the cord feeding the power.

The concept might not be appealing for a single terminal network like mine, but when the numbers increase the payback is impressive.

So lets get an insight of the technology before conferring over its advantages and shortcoming. But before even that, lets take a look at a any conventional Ethernet based network . . . Hmm . . . How about a wireless network in a medium sized office. 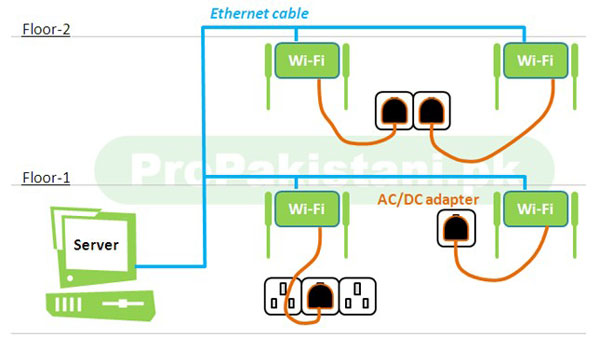 The figure shows how several Wi-Fi access points are set up across an office environment to provide wireless LAN and internet facility. In such a scenario, positioning these many adapters i.e. one for each Access Point would never continue to seem feasible once their count increases from four to many. Moreover, AC/DC adapters hold wide disrepute as power dissipaters. Some may even waste up to 40% of the power for nothing.

A scheme to tackle the power loss problem may possibly be to install a centralized DC supply unit as shown in the figure below: 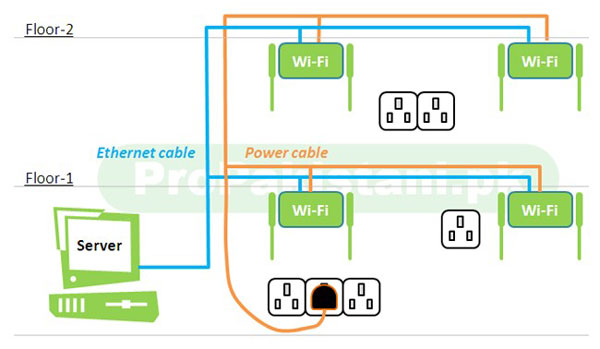 The solution is still not good to cut the expense out. The amount saved by reducing the number of adapters is worn in paying for the electrical wiring and the power therefore being dissipated in the long run of wires.

PoE steps in here; a technology that eliminates a separate power cable running all along the network cable. PoE eradicates the need of dedicated power cable by effectively delivering the power over the same Ethernet cable used for carrying the data. A PoE arrangement has two basic modules. A Power Sourcing Equipment (PSE) and Power-Data Splitter (PDS). Leaving the technical details spaced out, a PSE ramps up the DC power onto the Ethernet cable. A PDS, as predictable, separates the power from data and feeds the two to appropriate terminals of the device. Refer to figure below:

Overall, a PoE enabled network may typically have a single PSE and many PDSs. The number of PSEs in a network can be greater than 1, but still the ratio remains quite biased towards the PDSs side. However the minimum number of PSD and PDS is 1 each for the most simplest network even. 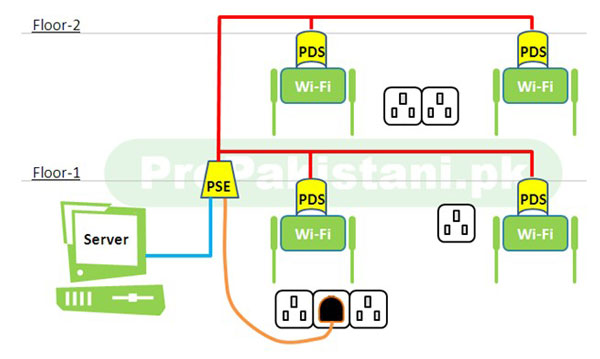 Although separate PSDs and PDSs are available for converting any ordinary Ethernet based network into a PoE network, devices are now being designed for a PoE network with built-in PDSs; known as Powered Device (PD). Some of the most common PDs available in the market are: Wi-Fi Access Points, Wi-Fi Routers, Ethernet switches, IP Phones, IP cameras and Electronic Notice Boards to name a few.