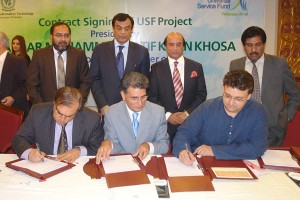 Through this project, broadband services will be provided in 37 towns and cities of the districts of Kasur, Nankana, Okara, Pakpattan, Sahiwal and Sheikhupura . In addition to this, 215 higher secondary schools, colleges and public libraries will get educational broadband centres. 57 Community Broadband Centres will also be established.

101,500 broadband connections are targeted to be provided under this project.

Giving his remarks on the occasion, Advisor to Prime Minister on Information Technology, Sardar Muhammad Latif Khan Khosa said that the prime objective of the government to allocate Rs. 1 billion out of Universal Service Fund, which consists of contributions of licensed telecom service providers, is to provide most modern services to the Pakistanis living in smaller towns and cities where this facility would not have come for another 3 to 5 years. It is the endeavor of the government to bring all parts of the country at par with each other. He further said that with such consistent efforts and spirit, Ministry of IT will undertake more challenging and productive programmes in the future for the promotion of telecom related services.

CEO of Universal Service Fund informed that after signing of these projects the total amount committed by Universal Service Fund for various ICT projects has reached 13.3 Billion Rupees. Out of 13.3, broadband in 06 telecom regions is getting 6.1 Billion. In his briefing he stated that target No. of Broadband connections are given so that the service providers not only lay the infrastructure but also sell the connections for which they would have to create awareness and give incentives to the people of those areas.

CEO USF further informed that Universal Service Fund continues to run Rural Telecom projects in which more than 3,000 unserved villages have already been provided service and work is in progress to provide telecom services in another 3,000 un-served villages. He informed that all amounts are disbursed exclusively through open, transparent competitive bidding process and all the bidding documents and bidding results etc are kept on USF website so that anyone in the world can see at any time.

Mr. Mushtaq Ahmed Bhatti, Member-Telecom, Ministry of IT and other representatives of the industry were also present at the occasion.