Qubee, a UK-based Augere company is told as ready to launch its services officially in Pakistan. Since its soft launch in October 2009, Qubee has secured 1,500 WiMAX customers in Karachi.

In an interview with Daily Times, Mubashir Naqvi, Chief Executive Officer Qubee announced that company is going to officially launch its services in Pakistan – starting with Karachi this month while expanding its coverage to other major cities such as Islamabad, Lahore and Rawalpindi in next two to three months.

Mr. Naqvi said that Qubee has invested about $70 million in last calendar year and planned to invest another $25 million to $50 million next year, depending on its capital and operating expenses. The company has rolled out its infrastructure network in all major cities of the country. Its network support partners are internationally recognized for the provision of best wireless Internet services called WiMAX.

In the faster-than-expected competition among broadband operators, he added, only those companies will survive who are financially sound and equipped with latest technology. “The service charges also matter a lot, therefore, we do a lot of care about it and offer our services from Rs. 750 per month.”

Mubashir Naqvi, who is former CEO of Ufone said that Qubee’s strategy is to share network with different telephony companies and penetrate in maximum parts of the country step by step with the shortest possible time. He intended to stretch coverage to all corners of the country.

He said the marketing model of the company is unique because we approach our targeted customers for saving their precious time instead them coming to us.

Qubee sales agent will offer door-to-door service in the potential and literate areas of the city. Besides, four sales and service centre, the service promotion is also done through telesales and four to five thousands phone calls are made every day.

Mr. Naqvi’s proven track record in sales is for sure going to help Qubee in achieving its targets. However, it may not beat Wateen when it comes to unlimited bandwidth per month. 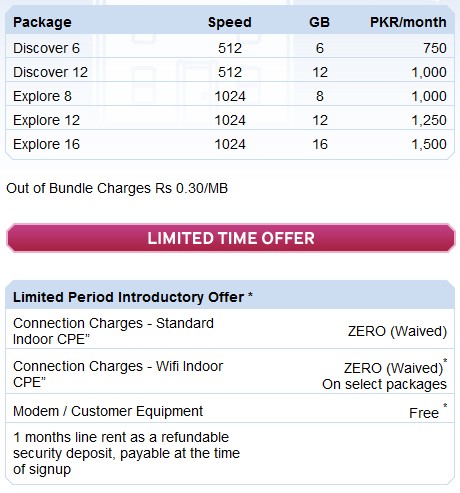