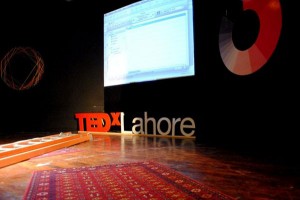 A genius once said, “There is no great genius without a mixture of madness”, that was Aristotle.

I can totally relate that madness to how I experienced TEDxLahore on July 31st in the Ali Auditorium. It was a madness of ideas, visions, madness of how dreams, dares and do’s come together to form the perfect blend of ‘Collective Genius’.

Let’s start with a little about TED and TEDxLahore

TED is a small nonprofit devoted to “ideas worth spreading”. The conference started out as a platform to unite people with innovative ideas from the world of: Technology, Entertainment and Design but now the scope has become even broader. As of today, over 700 TED Talks are available for free online.

TEDxLahore finds its association with TEDx, a program that enables schools, businesses or groups to enjoy a TED-like experience that they themselves organize, design and host.

The following review doesn’t run down with a spoiler label since my only aim is to put the post-event thoughts in a blender, shake’em up and then present to you whatever comes out of it – good or bad.

The Hype, Excitement, Oops! And the Hoo-Haa

The team made it sure that I enjoyed the experience throughout. For me, the excitement started the day I came to know about TEDxLahore through it’s Facebook fan-page and even though the event is now done and over, the excitement still hasn’t ended. From the attendee application form to how I waited for the approval email, the wait just kept adding more and more to the hype and fun.

I knew the day I signed up that I was about to be a part of something big, something brilliant, something exhilarating and TEDxLahore hasn’t let me down.

Now let’s move on to a little controversial talk – shall we?

Over a thousand applications were received but only a mere 380 were selected as attendees but the question that roams around the streets of mysteryville is how the attendees were selected, based on what criterion exactly?

For some of us, the “First come, first served” rule is enough to understand why some of us might have not been invited as attendees but for the rest of us I have another theory – The purpose of TEDxLahore wasn’t just to approve the attendee applications as they rolled in rather even consider the class of the applicant.

Teachers, designers, engineers, parents, journalists, technologists, entrepreneurs, students, professors, sportsmen, artists, writers are some of the many classes of attendees at TEDxLahore. Moreover it also matters how you filled out the application form since the team was probably hoping to look deep into your life experienceand ambitions instead of just knowing your name, age and location.

That brings it down to luck, wit, and enthusiasm but then again, it’s just my personal theory. On the other hand I think the TEDxLahore team could have done better by providing a sample of how the application form should be filled and as far as the issue of not notifying the rejected applicants is concerned, that was perhaps totally unprofessional on their part.

The Speakers, Talks, Performances and the Glitches

The choice of speakers was wise but the choice of numbers wasn’t. I personally would have preferred cutting down on the number of speakers and a primary focus on technology – but then again that’s just me. Perhaps language, culture, art define the flavor of the city of Lahore and perhaps that’s an experience that the organizers wanted the attendees to have.

I would label Dr. ZeeshanUsmani as the showstopper for the event for his brilliant sense of humor mixed with the great talk on ‘modeling a suicide bombing’, now that’s what you call innovation. The performance by NoorZehra (mother of Ali Noor from ‘Noori’) and the brilliant Tabla/Drum play by a group at the end of the show were the toppings of the delicious experience.

Much like any other event, TEDxLahore had some repelling elements but for all the learning and experience that the platform provided me with, I would happily want to ignore of all of it.

At the end of the day its for us to realize that nothing is perfect every new beginning is a start of something big and TEDxLahore is one such beginning for all of us, for many years and many experiences that are yet to come. Kudos to the AsimFayaz, the curator, and kudos to the team.