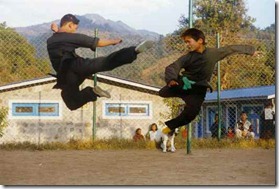 As another week commences, so does the barrage of advertisements from all of Pakistan’s cellcos, adamant on grabbing as many clueless subscribers as possible.

Ufone letting its usual suspects run around some city in an attempt to downplay other networks, Mobilink producing some Jazzy tunes to let everyone know that they still dominate, Telenor jingling away showing the flexibility of their product portfolio, Warid parading a beautiful model to explain some great offering which most of us forget to listen to as we were too mesmerized by the visuals, and Zong grasping at its target market of low income for dear life with offers of anything and everything that can be free.

With so much to digest, what does the consumer actually end up gaining?

Well, we can now link ads with companies within the first few seconds of it appearing; thank you Ufone and Telenor for keeping it consistent. However, while many rejoice at the seemingly low rates that are being constantly revived, for the pre-paid segment predominantly, it takes deeper analysis to see that all this run-around is definitely not the ideal option for Pakistan’s cellular market.

From 45 paisas every 30 seconds to 30 paisas every 20 seconds; we are spoiled for choice. But in reality, this war is all in the name of numbers; subscriber numbers, that is.

Every push made by Pakistan’s cellular company is done to increase those stats prior to the end of a quarter, in a bid to inflate the users on the network. This assists in additional revenue and helps project a healthier image of the company when results are reported.

Anyone thought about measuring quality?

While the PTA performs random checks on each cellular network, very few consumers undertake any deep analysis of the quality of service that will be offered by a company prior to subscribing. Yes, opinions are voiced. But over 70% of subscribers make their choice simply due to pricing they have seen or been advised of. After all, if I say that Cadburys is good quality but you get three Dodo bars for the same price, the masses will choose the latter. That’s the tested fact.

And the cellular companies in Pakistan know that. The level of innovation in the industry is equivalent to the evolution of man from a single-cell organism. Which consumer group is actually demanding it? How many of us would stand behind the company which proclaims to charge more than the others, but offer a guaranteed service quality irrespective of location?

Of course, this trend could be linked to our poverty levels and the importance of getting as much out of your money as possible. But seriously, if poverty was such an issue, where are the stated ‘100 million’ subscribers getting the billions of rupees to continue topping-up their phones? We are prepared to pay Rs.100 for a scratch card that ends up giving Rs.70 of credit, and then pay more for the gimmicky weekly offers.

India’s launching 3G, the West is moving towards 4G and Japan and Korea are so far ahead, the rest of world just gawks with amazement. The reason for these transformations is the strong consumer sense that prevails in those markets; people want quality and value, and this pushes the cellular companies to innovate rapidly in order to compete effectively.

My message to all you subscribers is to simplify. Sit down and calculate what you spend for your Mobile service and the quality received. Is it worth it? If not, step up and let your voice be heard. If so, let everyone know.

So, the next time you are watching the ‘U’ team on TV or being emotionally connected to the ‘Apna Hai’ shout; take some time to make sense out of it all. Then send a message to the cellular network letting them know that you are no longer buying scrap.