After its announcement and preview last year, Research In Motion (RIM) made delays to the launch of its tablet device, the PlayBook. The BlackBerry makers have put their belief of challenging Apple’s iPad dominance in a 7-inch sleek machine that runs on a completely different OS to its other counterparts.

The PlayBook could be considered as the most anticipated launch of the year, or at least the first half of the year. While there was little expectation of any long queues forming outside selling points when the registers start clinging on April 19th in North America, RIM is hoping that the device will prove a strong attraction to salvage some pride.

Initial reviews of the device were less than flattering, with many arguing that the company was releasing an unfinished product just to ensure shareholders could be convinced of the fight still remaining within the once Smartphone king. The bone of contention has been the lack of an email client within the device; all PlayBook owners would need to bridge their device with a BlackBerry handset in order to gain access to their emails. While the bridging functionality is a useful tool, it does dampen the all-in-one feeling that an owner would like to exude.

RIM has committed to an update in the summer that would bring more functionality to the PlayBook, but the present pitch is around the fast processor and true multi-tasking capabilities of the device. With a user base of 60 million worldwide, RIM is hoping to lure its current users away from Android and Apple tablets by keeping its Berry handsets as a vital tool to the full experience of the PlayBook. The continued slogan of secure communication has enticed several corporate customers to pre-order devices; however, exact numbers have not been revealed.

Early reports of sales on launch day for the PlayBook suggest about 50,000 devices flying off the shelves. While this pales in comparison to the 300,000 iPads that Apple off-loaded on its launch day, the number still holds strong against Android devices like the Samsung Galaxy Tab.

Analysts are still skeptical of RIM taking any big chunk out of the iPad-dominated tablet market; it is likely that Berry fans would be the main focus of sales for the initial period. On the local front, Mobilink has taken the pre-order route to become the first region outside of North America to offer the device to its subscribers. With Berry services still on the blink in Pakistan and no SIM insertion for GPRS, it is unlikely to draw a huge response in its early days, except from the die-hard, cash-infused clientele. 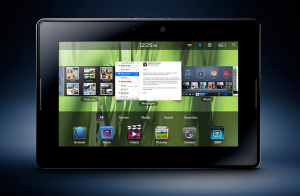