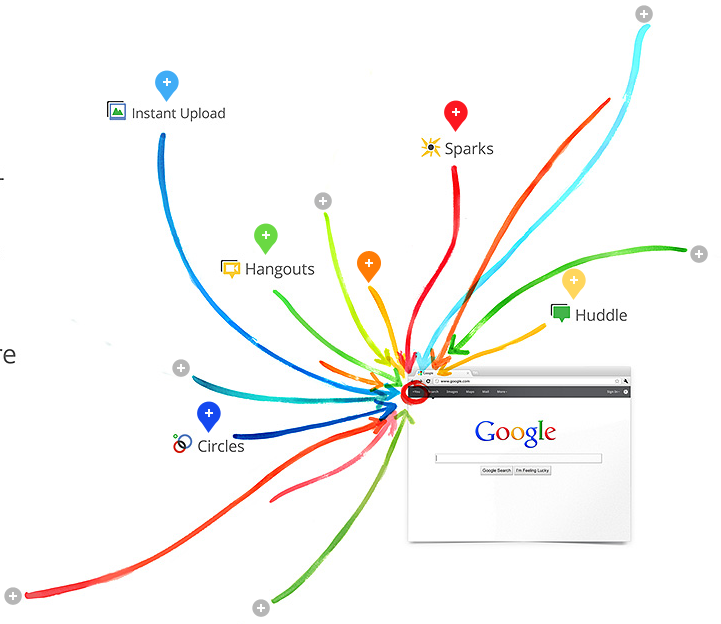 Google earlier showed a little that what it is capable of. Defeating social giants, Facebook and Twitter is not a piece of cake but still Google Buzz somehow prevailed.

With 700 million users, Facebook is currently ruling social media but believe me Google has potential to bring something that can overtake the market.

And seems like it has planned to do so.

Well, all these things are referring to the new version of Google, Google+.

Google Plus is going to be the next place which in my opinion will surely bring something different than Facebook, but still it will meet the requirements of Facebook addicts.

Salient features of this platform are going to be Circles, Instant Uploads, Hangouts, Sparks, and Huddle.

Circles are just like groups on Facebook, which you can manage as per your own desire to set privacy for specific people. Facebook with this new profile thing, got really complex and most of the people still don’t even know how to manage that.

With circles, you can simply drag and drop people to specific circles, a totally new experience indeed.

Sparks are just like interests. Simply search for one and Google will give you suggestions, not making it a search box, Google says that it is going to be a sharing box! Considering your interest, Google will look for content related to your mood and then you can simply add them to your interests.

Huddle is a group messaging app that works across Android, iPhone and SMS and will allow to send group messages to certain circles.

Hangouts are going to be another important feature of Google+, allowing you to video chat with group. Upto 10 people, you can add persons from your circles, friends and invite others. It is just like a group conversation.

Also share a video and all the hangout members will be watching that at once, comment, discussing live. Isn’t it a new thing?

Well, as per Google, they are in the first phase of Google+ and this is just start. So a few people will be invited to join and its not accepting open registrations at the moment, you can submit your email address here and wait for your turn.

Is Google+ going to affect Facebook culture in Pakistan?

May be it is a pre-mature thought at the moment, as we cannot compare Google+ and Facebook right now. Still considering the Facebook envy in Pakistan, people may prefer going to Google+ as they are just addicted of social networking and quitting it is harder thing.

While second options is always welcomed. Still we have to wait and see how it will emerge and will people accept it or not? Give your opinion in comments.

Another important feature that may give a +1 to Google+ is that most of the people are already aware of the news/rumors about Facebook selling user’s details to third parties and surely people feel more safe in Google’s hands than Facebook.

Android and iPhone app of Google+ is already available, also the mobile version of Google+ works just like an app.

In a nut shell, Google+ seems to be attractive, friendly, functional and above all it’s Google’s!

Have a look at demo videos to learn more about Google+, you can also visit live demo by Google to get your hands on Google Plus and enjoy the experience.