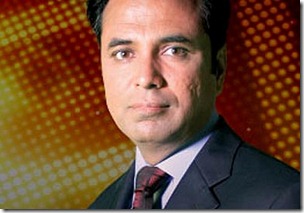 Talat Hussain, renowned journalist and TV anchor, is planning to debut his online presence with a website having dedicated segment for web shows to be streamed online.

If reports are to be believed, Talat Hussain has a team of professionals working with him on the project that is going to see a launch soon.

This home based venture (till now at least) of Talat is an effort to tap digital media, which will give him an opportunity to work on topics that are otherwise hard to hit while being in mainstream media.

Along with videos, specifically tailored for online audience, readers will be served with textual content with a focus on news, current affairs in addition to columns and opinion.

Talat Hussain told me that it will be a self financed project – not aimed for monetization at the moment. Though, Talat believes in financial viability of the project when it will have notable audience.

He said the move is not to quit the mainstream media, but to capitalize the growing and influential internet audience.

This is probably the best time for journalists to have their own blogs/news websites (just like ours). This way they can not only have a boss-less job but can work independently and of course un-biasedly in viable manner. Such projects can make good money as well, given the trend is not followed by every journalist/TV anchor to ultimately saturate the market.