Telenor Pakistan showed strong first quarter for 2012 with a growth of 23 percent in total revenues (in local currency) when compared to same duration last year.

Financial services contributed to 3 percentage points of the overall growth.

“I am delighted to see that Telenor Pakistan delivered an outstanding quarter on all financial parameters, clearly demonstrating this organization’s strive for continuous improvement,”

Telenor said that number of subscriptions increased by 1.2 million during the quarter and the subscription base was 14% higher than at the end of ﬁrst quarter last year. 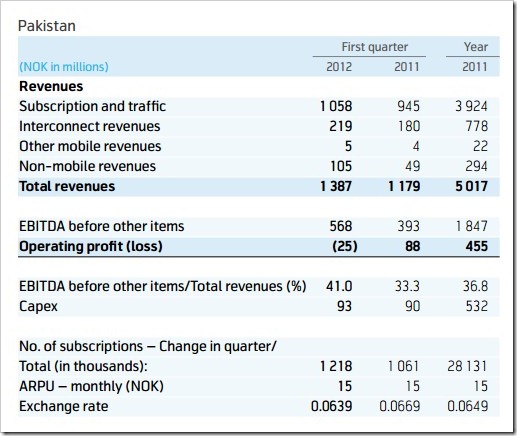 Here is the official PR on quarterly results:

ISLAMABAD, May 8, 2012: Telenor Group has announced its financial results for the first quarter of 2012. According to the results Telenor Pakistan’s subscriber base grew 4% over the previous quarter. It added 1.21 million subscribers as compared with 822,000 subscribers in Q4 2011, ending with a customer base of 29.3 million. Both EBITDA margin and ARPU were higher in the reporting quarter as compared with the previous quarter. SIM market share was stable at just over 24%.

Chief Executive Officer Lars Christian Iuel, in his comments following the announcement, said: “The first quarter financial results show that Telenor Pakistan continues to grow in a sustainable manner. As a company that prides itself on offering innovative services such as Easypaisa, we are committed to not only meeting our customers’ expectations but to exceeding them. We look forward to offering ever new products and services that are convenient to use to our customers to enable them to enjoy the benefits of telecommunications.”

In the first quarter of the year, Telenor Pakistan began a major network modernization project in preparation for offering next generation services to customers. Its branchless banking service Easypaisa was recognized by the Bill & Melinda Gates Foundation when it was offered a major grant to increase adoption of its mobile financial services among Pakistan’s poorest households.

Also in the reporting period, Telenor Pakistan through its partner Sybrid launched a state-of-the-art contact centre, which will help create jobs for 500 talented Pakistani individuals. Telenor Pakistan also became the first cellular operator to agree to work with the Government of Pakistan on the ‘8300 Voter Registration Service’.