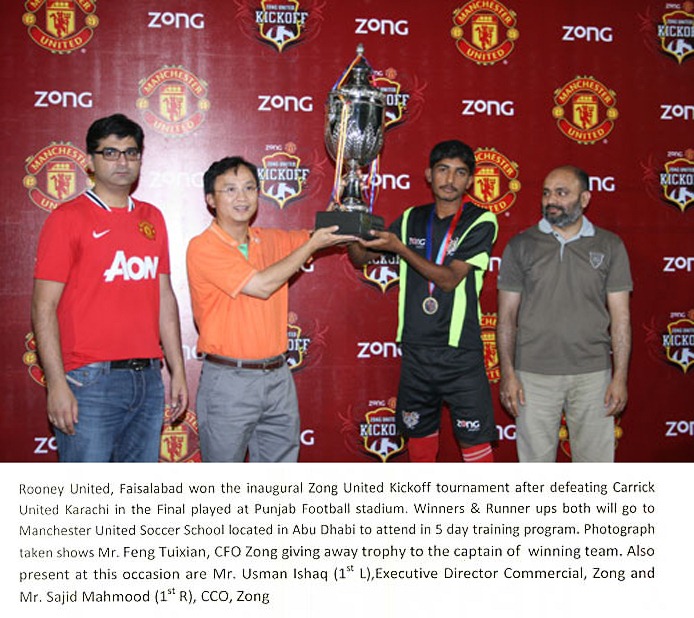 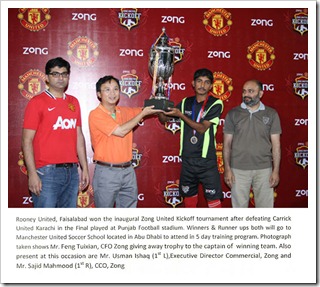 After an exhilarating ninety minutes of soccer, Rooney United Faisalabad successfully triumphed over Carrick United Karachi to be crowned ZONG United Kickoff Football Tournament champions. The final score of the match was 0-0, with the fiercely contested match heading into sudden death to determine the eventual winner.

Players of both teams have successfully qualified to participate in a 5 day training program at Manchester United’s state-of-the-art Soccer School in Abu Dhabi.

Both sides demonstrated a good, clean game of soccer, with not a single booking made during the entire match. There were equal shots on goal from both ends, with neither team yielding possession of the ball for long periods of time.

After sixty minutes of football, with no change on the scoreboard, the match went into overtime and still failed to produce a result. The equally footed teams then took the contest to the penalty kicks phase where still a result could not be achieved. When the match finally went into sudden death, a momentary lapse in concentration by the Carrick United goalkeeper provided Rooney United the fitting victory they deserved.

The final marks the climax of a 2 months long knock-out tournament where 128 ZONG registered teams of young boys competed enthusiastically for a chance at football glory. While initially it was decided that 16 players from the winning team and 16 other players would be sent to Manchester United Soccer School in Abu Dhabi, Mr. Usman Ishaq, ZONG Executive Director Commercial announced after the match, “Given their sterling performance in the final and the passionate football they have displayed throughout the tournament, we at ZONG have decided that all 16 members of the Carrick United Karachi team will also join the Rooney United team in Abu Dhabi.”

Speaking at the award distribution ceremony, Mr. Feng Tuixian, CFO ZONG said, “I would like to offer my heartiest congratulations to both Carrick United Karachi and Rooney United Faisalabad to making it to the final of the ZONG UNITED KICK-OFF Football tournament and giving us all a chance to witness the fabulous football talent that Pakistan has. It was indeed a well played contest and it was evident that both teams really put in their best performances. Though inevitably one side had to emerge as the victor, I believe that Pakistani football was the ultimate winner here today.”

Manchester United Soccer Schools (MUSS) offer coaching courses for footballers of all ages, backgrounds and abilities, from six year olds through to adults.  ZONG have teamed up with MUSS to offer 32 lucky winners the chance to participate in a 5 day program at their state of the art facility in Abu Dhabi, which will include a series of fun and challenging coaching sessions

focusing on a variety of different technical areas such as dribbling, short passing, turning and finishing. The program will also look to develop the young players in other fields, such as tactical understanding, and mental, physical and social growth.