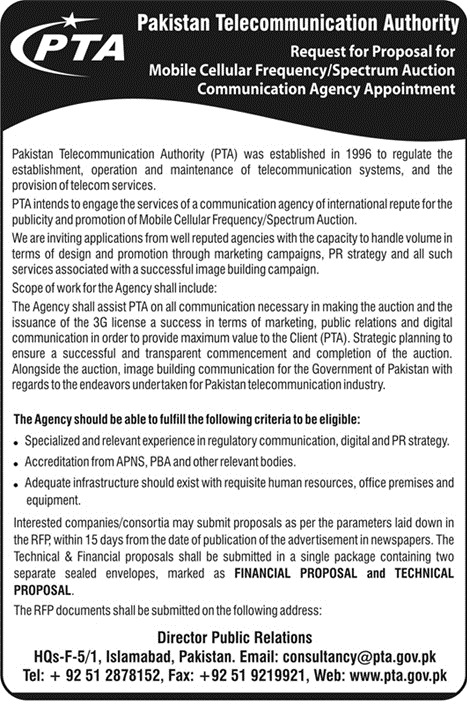 Pakistan Telecommunication Authority is looking for services of a communication agency for the publicity and promotion of 3G license auction that it is planning later this year.

An advert published in various newspaper asked communication agencies, of international repute, to submit their proposals with the PTA by October 15th, a time by when PTA is likely to have hired the consultant for the 3G auction.

PTA in its advert said that agency will have to assist the authority in making the 3G auction a success. PTA will require the communication agency to publicize, market, handle public relations and digital communication to maximize the profits that PTA can earn from 3G auction.

Chairman PTA in a senate standing committee held this week reaffirmed that authority will be able to conduct 3G auction by December 2012. He said that local and international telecom players have shown considerable interest in acquiring 3G license in Pakistan. Chairman revealed that selection of consultant for 3G auction will be finalized by October 15th, 2012.

Below is the advert that PTA published in papers: