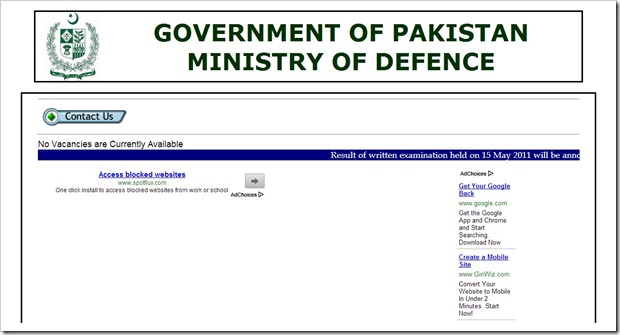 We have reported this before, and yet again we came across another government website displaying adsense ads to make extra bucks as an extra earning for the webmaster, assuming that this display of ads is not authorized officially.

Just to let those people know who argue that there’s nothing wrong in displaying ads on a government website – given ProPakistani and countless other websites display ads too – government websites, or any official website for that matter, is not suppose to run ads. Just look at Mobilink’s website, or say official website of World Bank, they won’t be running ads – at least the adsense.

These government websites with adsense ads is usually the work of webmasters or those who operate them. They insert their ad code to make extra money, other than the salary they get on monthly basis.

One can argue that a hacker could have placed the ad code on the website, without the knowledge of innocent webmaster, in that case I would recommend to fire the guy who doesn’t even visit his website to have noticed the ads to ultimately remove them.

Folks at Government: Its time to get good now.

Meanwhile, have a look at below screen where Ministry of Defence, for its recruitment website, is shamelessly displaying adsense ads: