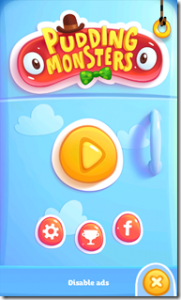 Pudding Monsters is one of the best games I’ve played in recent times. Its both fun and addictive and features a gameplay which is probably one of the most engaging in any Android game right now. And yes, its Free.

Made by Zeptolab (makers of the renowned Cut the Rope series), this is yet another fun puzzle genre game released at the end of 2012.

The game is available for iOS and Android.

Pudding Monsters falls into a category of those games which don’t have a proper story. That’s obviously not a con though as it’s the gameplay that matters and in this case, it’s the star of the show. You only have to swipe to merge the pudding monsters which slam into each other at great paces. As soon as all the ‘pieces’ are merged, the level is over and you get from 1-3 stars which you only get if the monsters are placed on the stars beneath them.

The game currently offers 75 levels each divided into three chapters: Fridge Escape, Room Invaders and The Neighbourhood (which I think is the best because of two reasons: difficulty and beautiful graphics). The only problems here are that firstly, the no. of levels in this game are quite less. You may think that 75 is not a bad number but that’s where the second problem is. Almost all those levels are extremely easy and I actually finished the game in just over an hour. Still, if you are unable to pass any level, you can buy ‘mushrooms’. What these mushrooms do is that they fill the whole screen with pudding monsters and that passes the level without any hitch.

After completing the game, a few bonus levels are unlocked and you can complete the few special challenges where you have to get each an every possible no. of stars that can be attained. For example, if in any level, the highest no. of stars you can take is 3 and the lowest 1, you have to pass the level with 1, 2 & 3 stars and as a reward, you’ll get a special crown. This increases the gameplay time.

The monsters themselves are of numerous types. There’s the common red monster which is plain simple. There are sleeping monsters in which you have to crash into. There’s a green monster which spreads green sticky liquid all over the place. Then there are the hypnotized monsters which move at a same direction at the same time. There are also eyeballs which have to be swiped onto red liquid to transform them into a monsters. You’ll even find cloning machines in the third chapter. 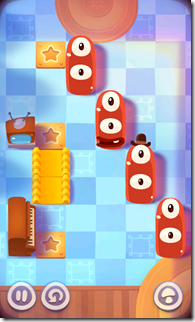 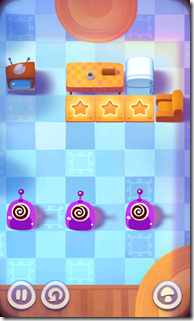 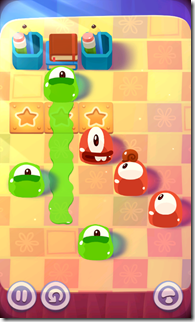 Just like Cut-the-Rope, Pudding Monsters too is of that type of games which can be just picked up and played anytime. The game is ready to be played in less than 10 seconds after you open it. Moving along the menus is easy and snappy and loading screens are quick. I’ve played the game for quite a long time and yet, not even a single crash or even a performance hiccup (although you might say crashes on dual-core phones are rare, but the TED app crashes my phone everyday and BBC News & some other apps do that sometimes too). This is one of the most polished and refined games I’ve ever played on my Android.

As I said earlier, this is one of the best games I’ve played in recent times. It is fun, entertaining and polished. The only gripe we have is the lack of levels and the ease with which this game can be finished. If updates are rolled out by Zeptolab quickly, then they might well have got a best-seller in their hands. Its not Cut-the-Rope, but still easily among the best games in Play Store right now. The guys over at Zeptolab have nailed it once again.