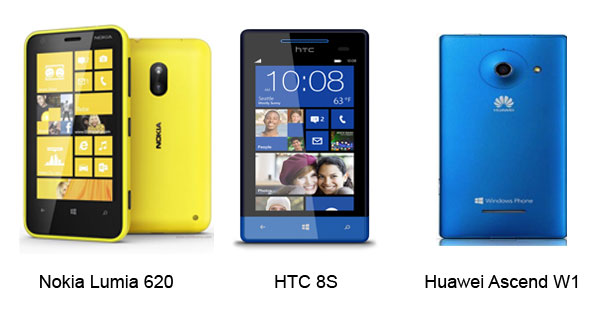 With only a handful of Windows 8 smartphones available in the market currently, it has been quite difficult for the budget-conscious consumers to even consider buying a Windows 8 device.

The big companies, however, are set to change this notion now by releasing smartphones that everyone can buy while still offering decent specifications and the best ones among them are the Nokia Lumia 620, HTC Windows Phone 8S and Huawei Ascend W1.

Here is a comparison of their specs:

The curved back makes it easier to hold.

When it comes to colors however, Nokia goes to the next level with the Lumia 620. Offering a large choice of colors along with a different color on the front bezel will alone make this phone the top choice of the youth.

Sadly though, the glossy plastic and the rather chubby build make Windows Phone 8S the winner here. The Huawei Ascend W1 too has got a good choice of colors but the complete details aren’t out yet.

Although not as important as Android, powerful hardware still plays a big role in Windows Phones. What’s interesting here is that all of these phones have virtually the same ‘engines’ under the hood except the 200 MHz that the Huawei smartphone has got in its processor but it surely won’t do wonders.

The edge here goes to the Lumia 620 which has got 8GBs of storage compared to 4GBs of Windows Phone 8S and Ascend W1.

Right now, almost all Windows Phones are the same except for the exclusive apps. And this is the place where the Lumia shines again. The Nokia smartphone comes preloaded with special Nokia apps such as Nokia Lens, Nokia Drive, Nokia Drive and Nokia Music.

HTC’s Windows Phone 8S also comes with a special HTC app which is fine but neither exceptional nor quite as functional. As for the Huawei smartphone, we are yet to see how many home runs this phone will hit with its exclusive apps… if it has got any.

You already saw where this was going. HTC and Huawei have both managed to churn out brilliant devices but the exclusivity that the Lumia 620 is giving in the Windows Phone arena is unmatched.

Add to that the double storage and a youth-eccentric design and Nokia may have got a winner here. And oh yeah, its cheaper too. HTC may gain some customers with the Windows Phone 8S’ design but the higher price will leave some disappointed.

Huawei’s product isn’t out yet so its not in the equation right now (too bad we don’t even know the price right now).

The strange truth though, is that if you like Windows Phone, you’ll be having a happy time with any of these devices but if you are not ready to join the club yet, even the Lumia 920 or Windows Phone 8X won’t be able to please you.