Uniformed and armed men, allegedly from Ministry of Interior (FIA), are said to have entered into Pakistan Telecommunication Authority headquarters today (at 4:30 PM) to forcefully arrest Mr. Nasrul Karim Ghaznavi, the member finance and Dr. Khawar Siddique Khokhar, the member technical, we have confirmed with sources.

Armed men were accompanied by Mr. Sajjad Latif Awan, former DG enforcement at PTA and currently on special duty, when they entered PTA’s headquarters but they had to run away after resistance was shown by PTA officials.

It is still unclear that why these FIA armed men wanted to arrest the members, the most senior officials of the PTA, who are completing their service terms next month.

We are currently in process of obtaining more information on the incident and will update this story as soon as we get anything further on this.

It merits mentioning here that there is an fierce tussle going on between Mr. Sajjad Latif Awan and Members of the authority. Mr. Latif Awan, who was holding the headship of three PTA departments was suspended by the members. Who — in response — sent a letter to senior members for not going beyond their allowed limit.

Mr. Latif Awan was later made OSD (officer on special duty) by members and was relieved from all his powers.

Unconfirmed reports suggest that Mr. Sajjad Latif Awan had approached FIA against Member Finance for allowing one cellular company monetary relief. However, an arrest on just a complaint is beyond understanding.

PTA is said to be preparing a statement on the incident.

This is happening at a time when Cabinet Division has published adverts – just last week — for the appointment of new member finance and member technical.

A copy of complaint filed by both the members at Secretariat Police Station is shared with ProPakistani.

Dr. Khawar Siddique Khokhar, Member Technical, in his complaint, has mentioned that Mr. Sajjad Latif Awan – along with five to seven uniformed and armed men – entered into his office and tried to forcefully abduct him.

Dr. Khokhar said that armed men, along with Mr. Latif Awan, physically assaulted, thrashed and harassed him before his colleagues. A CCTV footage of the armed men entering into PTA office was also shared with police station.

Below is the copy of complaint. A similar complaint was filed by Mr. Nasrul Karim Ghaznavi, the member finance, as well. 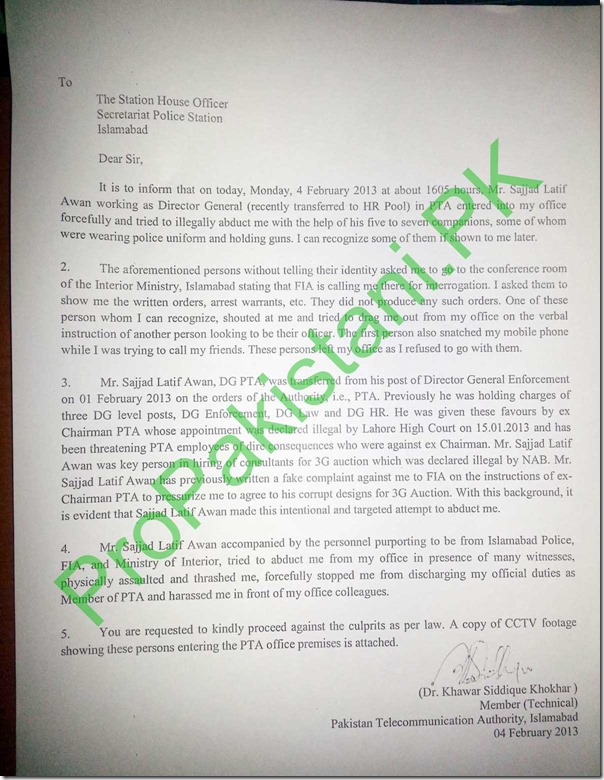