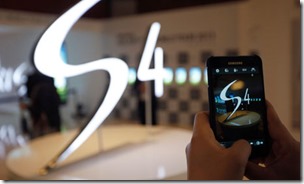 At its famed I/O Conference, Google, instead of announcing a new Nexus smartphone, Google has announced that it will be selling the Galaxy S 4 instead with stock Android OS. The phone will come with the same specs as the original Galaxy S 4 with the only difference being the original, skin-free Android UI instead of Samsung’s own Touchwiz with Nature UI.

The phone will also lose the exclusive Samsung apps but will come with an unlocked bootloader so there won’t be any end of possibilities. And of course, the updates will be coming to this phone before any other existing Android device on the market, thanks to Google’s trusty, uncompromised support.

The phone will come with 16 GBs of expandable storage and will be available for $649 or Rs. 70K at launch. The version of Android running is unknown though as Google might announce a new version of Android in the very conference this phone was announced it but we can’t say that for sure.

The phone will be available at Google’s own Google Play Store initially.

In case you’ve forgotten, these are the specs of the Samsung Galaxy S 4: