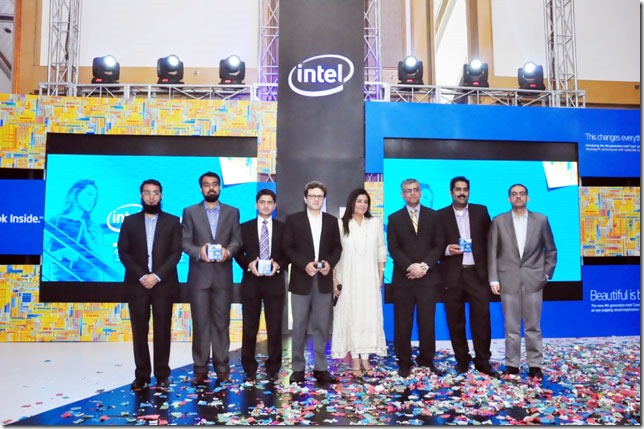 The new Intel Core processors provide responsive, secure and powerful performance for consumers to create and consume content wherever their mobile lifestyles take them. The first chip ever built from the ground up for the Ultrabook™ and the most significant roadmap change since Intel® Centrino® technology, 4th gen Intel Core processors combine PC performance with tablet-like mobility, accelerating a broad new category of 2-in-1 devices.

“4th gen Intel Core processors offer the most significant gain in battery life enabling ever achieved by Intel, up to double the graphics and significant CPU performance improvements that are delivering exciting new consumer experiences,” said Naveed Siraj, Country Manager, Intel Pakistan. “Today’s announcement accelerates a new category of 2-in-1 computing devices delivering the best of a notebook and a tablet in amazing new form factors. This year is the perfect time for consumers to refresh their old tablet or PC with these new 2-in-1 devices.”

4th gen Intel Core processors can bring a 50 percent improvement in battery life over the previous generation, and two to three times improvement in standby battery life. Intel exceeded its expectations on power reduction at the CPU level to as low as 6 watts and also worked across the system for power optimization.

Active power is improved as is idle power by architecting new ultra low-power processor states where the CPU consumes a fraction of the power compared to previous idle states. The 4th generation Intel Core processors also bring the highest performance currently available in mainstream computing with the additional benefit of superior graphics support.

4th gen Intel Core – completely redesigned from the ground up specifically for the Ultrabook – represents a seismic shift in the compute landscape. All new Ultrabooks will be touch-enabled and have Intel Wireless Display capability built in to bring natural touch and motion interactivity and speed mode for low-latency gaming on the big screen.

Ultrabooks will also be hardware-ready for voice command and control, giving the user flexibility to choose the most natural and intuitive way of handling the task at hand. Ultrabooks will wake in less than 3 seconds from deep sleep and in some cases much faster, offering the nearly “instant-on” experience that people want.

Ultrabooks will pull email, social media and other updates while in a low-power mode, meaning less waiting for fresh data upon waking. Ultrabooks are also equipped with built in security capabilities. The recently introduced McAfee LiveSafe service brings the deepest protections available by taking advantage of technology in new Intel Core processors and Intel IPT and Intel AT.

Built for the Enterprise

It is estimated that by 2016 all TV, video-on-demand and Internet video combined may compose up to 86 percent of global consumer traffic.