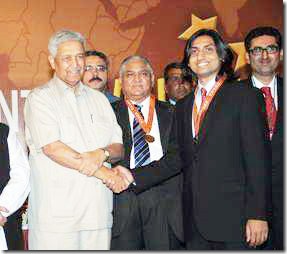 Umair Aziz, Chief Technology and Innovation Officer of Creative Chaos, a leading technology consultancy, recently received the 1st Federation of Pakistan Chambers of Commerce and Industry (FPCCI) Achievement Award for inventing and developing a state of the art NFC (near field communication) based fare collection system for mass-transit.

Dr. Abdul Qadeer Khan, in the presence of distinguished business leaders, presented the medal to Mr. Aziz at a ceremony held in Karachi.

The system is called bPass and is currently being piloted in Kuwait, Jordan & Sharjah.

bPass is the first deployment of NFC that has been integrated with a payment gateway to provide a Tap and Pay solution. The system enables customers to pay for their commute fare by tapping their mobile phones on a device. The fare is then deducted from their cellphone credit. It is however not only dependent on cellphone credit, it can be integrated with any payment system.

The Federation of Pakistan Chambers of Commerce & Industries (FPCCI) is the apex body of trade and industry of Pakistan. FPCCI servers as the bridge between the Government and the Private Sector and its membership covers 48 Chambers and 96 Associations.

The FPCCI achievement awards recognize and honor the dedicated individuals and enterprises of Pakistani origin that have made sustained and lasting contribution at the in economic and socio-economic development of the Country and helped build its image and thus rendered all Pakistanis proud.