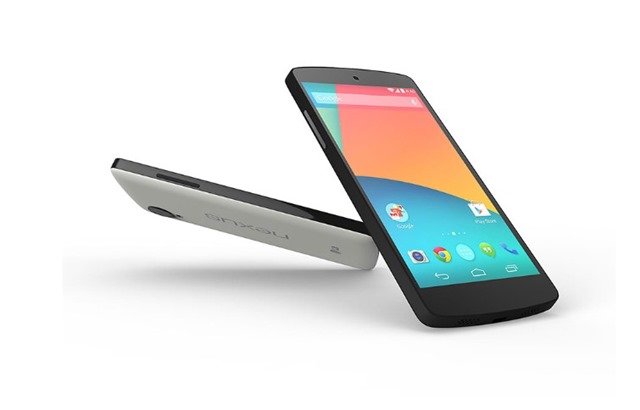 This is it. The Smartphone which is known for providing top-of-the-line experience at a lower price has finally gone official. After dozens of leaks and rumours (including once when its entire spec-sheet was revealed), Google has finally pulled the covers off the Nexus 5 – developed by LG — and it runs on Android 4.4 KitKat.

As is usual with these phones, the Nexus 5 packs quite a punch. It has a 4.95″  True HD IPS Plus panel on the front with Full HD resolution and 445 ppi pixel density. It is Gorilla Glass 3-protected.

The phone is made of plastic, but since it’s so cheap, we can live with that. The back does come with a soft-finish though. It weighs in at 130g, respectable for a phone of this size, and is 8.59mm thick. And quite unlike those metallic side-buttons on its competitors, the ones here are made of ceramic. Interesting.

On the inside, the phone houses a 2.3Ghz Qualcomm SnapDragon 800 processor with 2 GB worth RAM, Adreno 330 GPU and 16/32 GB flash storage. That last bit is a huge relief as as the meager 8 GB storage option is gone for good now.

Towards the back is the 8 megapixel camera with OIS, HDR+ and a 1/3.2″ sensor with f2.4 aperture. It is also capable of doing 1080p Full HD video recording and also comes with an LED Flash for use in low-lighting.

Considering that the last year’s Nexus came with an abysmal camera, we really hope things have changed this time. A 1.3mp camera is also found at the front.

The Nexus 5 is the first phone of the series with LTE, which is pointless for us (Pakistanis) but is a good thing to have (in case, times change in the future). It also has Wi-Fi 802.11ac, Bluetooth 4.0, NFC, A-GPS and microUSB.

For powering itself up, the phone comes with a 2300 mAh battery which does feel small for a 2013 smartphone but it seems as if Google has optimized the OS rather than increase the battery capacity here. Music playback, for example, is 60 hours long, thanks to a dedicated audio processor and software customizations. Wireless Charging is also supported.

Here are the specs of the Nexus 5:

The accessories for the Nexus 5 includes bumpers which cost $35 a piece, while QuickCovers which cover the front & the back and are compatible with wireless charging cost $55 each.

We know that’s quite a lot of money to ask for a phone which will be outdated after a year, yes, but the thing is that every bit of technology has and will. You may argue that point but there’s certainly one thing which no one will argue and that’s the simple fact that Google has nailed it. Again.