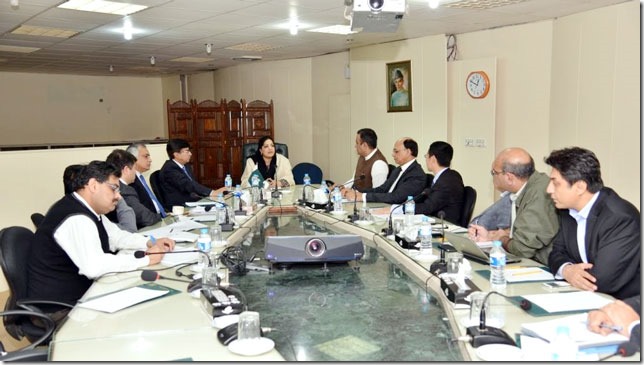 Living up to the core objectives of full transparency and inclusive consultation, the GoP will make all possible efforts to include suggestions of all stakeholders particularly the Cellular Mobile Operators to ensure successful completion of the grand initiative of the Next Generation Spectrum Auction.

This was stated by Minister of State for IT Mrs. Anusha Rehman Khan while chairing an important meeting with the CEOs and representatives of the Cellular operators here at Ministry of Information technology today.

Anusha further added that all elements of the framework will be structured to ensure, benefit to the public, maximal investment into rollout of networks, and financial viability of the Mobile Broadband market.

The meeting was also attended by the Secretary IT Mr. Akhlaq Ahmed Tarrar and Chairman PTA Dr. Syed Ismail Shah.

The mobile operators who are the biggest stakeholders in the auction initiative — due to the expected participation and investments — jointly met the Minister to apprise her of the major suggestion of the industry and to request support  prior to close of consultation on the draft Information Memorandum issued by the Government.

A well balanced formulation of auction design and regulatory mechanism for the ensuing licensing is considered imperative in ensuring successful auction and a healthy mobile broadband market for the ultimate benefit of the broadband deprived Pakistani telecom users.

The Minister  and other key decision makers present gave due consideration to the suggestions presented during the meeting in a manifestation of an open and consultative approach that has been the hallmark of the GoP approach to the telecoms sector programs and initiatives.

There was a consensus that improvement of both the auction regime and the requirements of ensuing market development based on the principles of fairness, level playing field and proportionate forbearing regulation of markets for the benefit of the Pakistani consumers is essential.

The industry representatives assured the Minister of continued support and all endeavours to constructively contribute towards the success of the auction to the mutual benefit of the Government, the sector and most importantly the general public.

The Minister & her team duly considered industry contributions, and after mutual consultation most of the specific issues raised during the meeting were duly addressed, and it was agreed that finalized Information Memorandum will duly reflect the consensus.