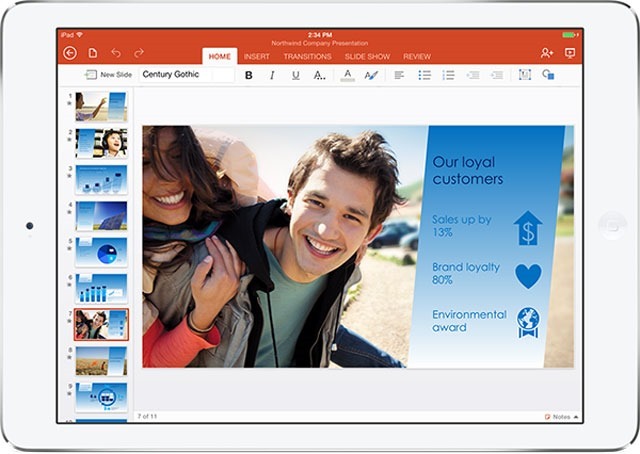 Microsoft has finally released the Office suite of apps especially made for the iPad, after years of wait.

The suite, which comprises of Word, Excel and PowerPoint can be tried out for free when it will hit the App Store shortly.

Additional functionality, including editing and creating new documents, requires an Office 365 subscription. Office Mobile for iPhone and Android is also being made free.

The app has been built from the ground up for Apple’s large display device, with an emphasis on ease via touchscreen use. Files from SkyDrive and SharePoint account can be opened, or simply stored on the iPad.

The interface is obviously inspired from the desktop Office apps, featuring the same Ribbon UI, meaning that if you’ve used the suite on the PC, you’ll be ready from the get go on the iPad.

The three applications are available as separate apps. You get a toolbar at the top on the editing screen for all the basic functions and more. There’s even a custom keyboard on Excel, plus enough transitions on PowerPoint so that you don’t miss the desktop experience.

All of the documents get saved on the cloud automatically which means you’re able to start while on the move straight from where you left off.

Of course, as said earlier, if you want to do any serious stuff, you’ll have to empty your wallet and that is an expensive option. Currently, the Home Edition costs $100 a year which is a steep price to pay. (Apple has made its own suite of apps free for all iOS devices brought after 1st September 2013.)

Apple’s option may be free but it is not as feature-rich. If you’re a professional, and want a good suite of apps, you certainly can’t get any better with this.