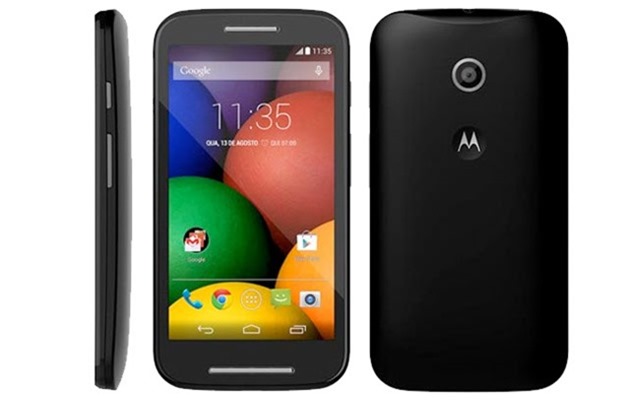 Motorola has been announcing several interesting devices in recent times but in the last six months, it outdid everyone. First, it showcased the Moto G, which still remains the best budget smartphone in the world and now, taking another big step Motorola has announced the Moto E which is even cheaper.

At the front, you have a 4.3″ display with 540 x 960 qHD resolution, leading to 256 pixels per inch. Moto E is also Gorilla Glass 3-protected. Design-wise, the phone is very similar to the Moto G and the Moto X, and comes with removable back-covers. (Back-covers are available in four colours: Black, White, Lemon and Turquoise.)

Under the hood of Moto E, you get a 1.2Ghz dual-core Snapdragon 200 processor, which sits a step below the Snapdragon 400 on the Moto G. That is accompanied with 1 GB worth RAM and 4 GB internal storage, which is also expandable. Adreno 302 handles the graphics.

For connectivity, you get 3G, Bluetooth 4.0 LE, Wi-Fi, FM Radio and GPS with Motorola’s Moto E. The OS running is Android 4.4.2 KitKat, which is covered by a thin skin custom made by Motorola.

The OS is said to get regular updates in the future. The phone is powered by a 1,980 mAh battery.

Motorola has even made a website titled “Goodbye Dumbphone” to mark the phone’s launch. That is sure to send a clear message to competitors and customers alike.

With the Moto E, Motorola is giving people a clear message that its possible to get a quality phone at a down-to-earth price tag. And that’s tough to say no to.

Moto G with LTE and microSD

Along with the Moto E, Motorola also took time out to announce an special version of its Moto G smartphone. Unlike its previous versions, this particular model comes with 4G LTE and a microSD card slot onboard. Both of those were sorely missed.

The rest of the specs are same, namely the 4.5″ HD display, Snapdragon 400 processor, 1 GB RAM and 5 megapixel camera which also shoots HD videos.