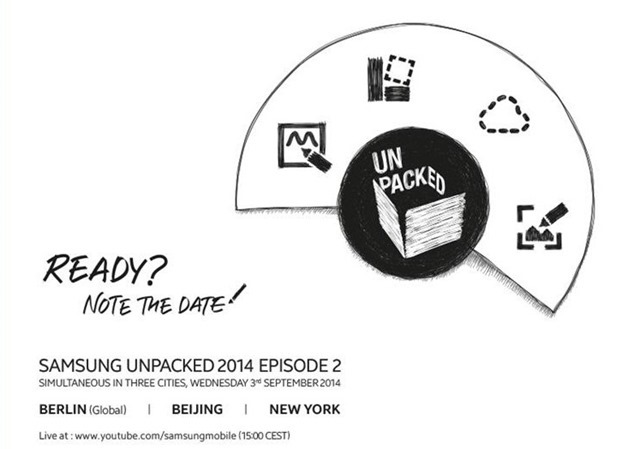 Samsung is all set to announce the newest addition to its Note line-up almost three weeks from now, on September 3rd. The invites for the Unpacked event come with a tagline underneath saying “Note the date”, clearly indicating what Samsung is up to.

This is the time of the year for one of Samsung’s two most major releases anyway.

This year’s release is expected to come with the same 5.7″ version as the last Note 3 albeit with a better resolution.

However, the company has announced its intention to announce two flagships with metal bodies later this year. The Note is one of Samsung’s two biggest offerings of the year so you can be almost sure that it will be metal-clad too if Samsung’s speaking the truth.

The other phone, the so-called Galaxy Alpha we can’t say much about, although rumours have been flying high.

The Note 4 is also expected to come in two versions: one normal and a curved one. You can almost be sure that the fingerprint scanner and heart-rate monitor will come. The display’s resolution will most-probably be QHD.

The Note 4 announcement will be Samsung’s first after a horrific financial report for the last quarter. In three months alone, the revenue dropped by almost 10 percent, with profit falling by about 25 percent.

With the old design head gone, the company can finally try a bit harder than fake leather to beat the competition in design.

The leaks of Alpha suggest a fairly alluring design and the Note 4 may not be much different. After the incremental updates when it came to flagships in the past years, Samsung really has to announce a genuine contender in order to remain valid in the coming future.