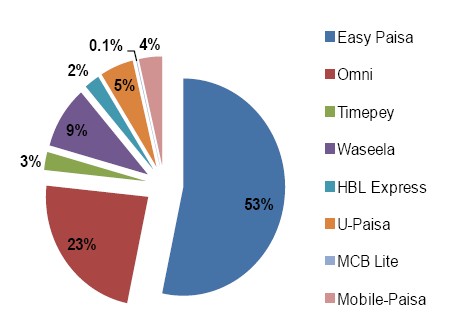 It is seen that Telco-lead services are mainly driving the BB sector while bank lead services (except UBL Omni, that mostly deals with government payments) are mostly struggling. Take example of HBL express, which has only 2% market share despite the fact that they had started services way ahead of Mobicash and U-Paisa or Mobile-Paisa for that matter.

Above figure suggests that established MFS players still hold a noteable share in the sector however their growth rate remained consistent during the reported quarter as new entrants are doing well in terms of snatching the share from bigger players.

Increased growth in new players’s market-share is mainly attributed to shared-agents that were previously selling Easypaisa-only products but now they are lured by new-entrants with more incentives. The situation is alarming for Easypaisa since they invested a lot of time and resources to get the agents the required training and customer-base, which is now freely capitalized by new-entrants against extra-incentives.

Easypaisa is naturally concerned about the situation and is currently lobbying for regulations against agent-sharing, however, the fact remains that agents were never signed for exclusivity and this is where new-entrants found their way to creep up their market-share.

This scenario will also benefit the end-users who are likely to get more innovation in services at lower-costs. With increasing competition, associated services charges are now finally going to get lower that will ultimately result into more inclusion of masses towards branch-less banking.

Not to mention, Easypaisa recently waived service charges for funds transfers between mobile account to mobile account. One can expect more such steps from MFS players in the coming days. 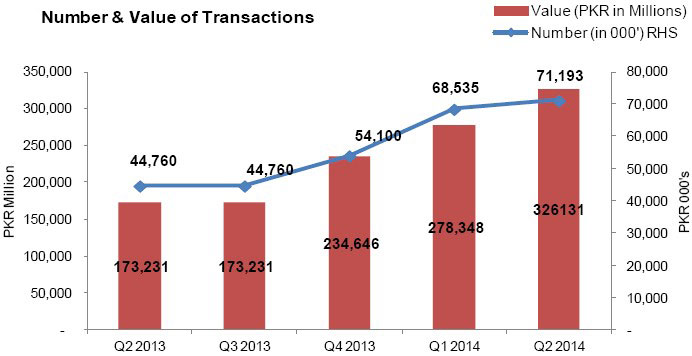 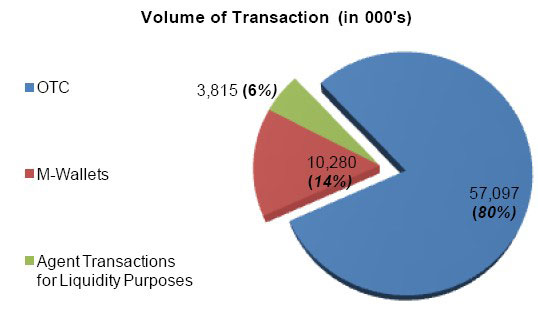 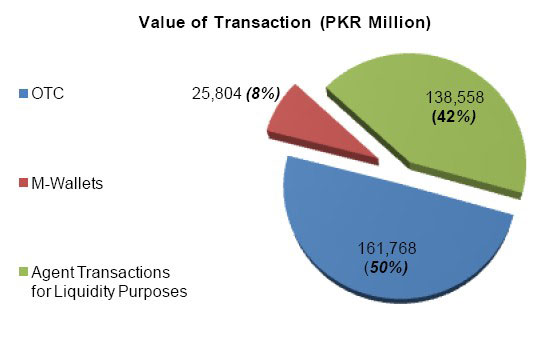 During the quarter 428,890 new BB accounts were opened, prompting total BB accounts to increase by 11% (compared to 10% last quarter) and cumulatively reached 4.2 million in number.

As the number of accounts is increasing, so are the BB deposits which have increased to Rs 6.2 billion as of June 30, 2014. From the total deposits, 53% stem from agent accounts and 42% are attributed to Level 0 accounts. Moreover G2P accounts are also currently holding Rs 3.6 billion in deposits.

The market leaders remained at the top in opening new BB accounts. Around 60% of the new accounts opened during this quarter were by EasyPaisa followed by 25% by Omni. However the highest growth in account opening was seen in Mobicash whose BB accounts grew by 40%, which has now placed its market share at 2%.