If you want to buy a Smartphone these days, you really are spoilt for choice. Aside from well-known manufacturers, there are plenty of other vendors making inroads into the local market. And I must say here that as far as value for money and choice is concerned, customers have never been in better shape.

Today, we will be reviewing the Voice X5 Xtreme. The smartphone is one of the most high end offerings by the company and is poised to heat up the competition for Smartphones around the PKR 30,000 mark. Before we begin, we should mention that rather than using a template and doing a standard review, we’ve decided to change things a little. We’ll be covering things we liked about the smartphone, what we didn’t like and a general value-for-money comparison at the end.

But before we begin, let’s have a look at Voice X5 Xtreame in detail:

Despite having a 5 inch display, the Voice X5 feels quite good in the hand. It has a standard rectangular design but the back of the phone is slightly curved at the edges, so that helps with grip. The phone is quite light as well so that makes for no issues upon extended usage which is an advantage since we’re dealing with a larger than usual device.

The Voice X5 uses a plastic construction and some might not like it but frankly, it’s a non-issue for us. The first thing we did was put the phone in its protective casing (comes with the phone in the box) and considering it contributes to a lower weight, we can live with it.

Hands down, the best feature of the Voice X5 Xtreme is its 5 inch IPS panel. It has a fullHD resolution (1920×1080) which makes for great visuals. We compared the screen to IPS displays from other manufacturers like LG and we were very impressed with what we saw. Judging across different criteria like viewing angles, sunlight legibility, touch responsiveness and color reproduction, we give it top marks. Watching movies, TV shows and just browsing in general should be a pleasure on this screen.

The Voice X5 Xtreme has a 13MP camera at the back and a 5MP camera at the front. The resolution and details on the photos we took were good and pretty much what you expect from a smartphone camera. Outdoor photography gave us pretty good results and indoor performance was satisfactory as well but we noticed a slight over-saturation in some photos. For general usage, it’s a perfectly good camera and won’t let you down.

If you’ve seen the branding and advertisement for the Voice Xtreme X5, you’ll know that it touts the ‘Octacore’ processor of the device. That by itself gives zero indication of how good the device is so please never be taken in by such statements. In Voice X5’s case though, the advertisement isn’t far from the truth.

First, let’s get the technical aspects out of the way. The X5 has a 1.7GHz MTK MT6592 Octa-core processor and 2GB of RAM. The performance of the device in CPU intensive tasks was awesome. No matter what we threw at the device, it performed admirably. Multi-tasking with tons of open apps in the background is a breeze with the X5.

We’re skeptics when it comes to benchmarks being the sole indicators of performance. Companies optimize for benchmarks, the benchmarks themselves aren’t consistent and often real world usage is drastically different. However, we have attached the scores for Voice X5 since we do not think they are misleading in any way.

Not So Good Things:

No matter how good a smartphone is, the battery makes or breaks how much we like it. You could have hardware from the year 2050 in a device but if it won’t last a day on a full charge, it’s useless. We are quite disappointed with the battery performance of the Voice X5. As soon as we found out that it was a 2000mAh unit, we groaned because on paper, it’s simply not good enough.

Real life performance didn’t help change our mind either. On heavy usage, we had to charge the smartphone twice a day. The combination of a 5 inch display, fullHD resolution and low capacity means that this smartphone is not for anyone who values battery life. On a brighter note, the battery is removable so it’s possible you could purchase a higher capacity battery and replace the stock unit.

We’ll admit, we were a bit flabbergasted at the slight lag we encountered when we used the device. This was present in default system animations and while it may not be noticeable for anyone coming from a lower to upper middle end device, it might still be an issue for some of our eagle eyed readers.

We should also mention that graphical intensive tasks are not an area where the Voice X5 shines and that’s due to the hardware of the device. 3D intensive tasks fare noticeably poorly when compared to other chipsets. 2D performance is better but still not as good as the SnapDragon line. Overall, it’s not as bad as to be a deal breaker but it’s still something to be aware of.

We were disappointed by the low light performance of the camera. The images were washed out and the flash didn’t help either. If you don’t have good lighting, the camera on the Voice X5 is not going to be of much use.

Check one of the indoor picture we grabbed (Clicking on thumbnail will get you full sized image):

The Voice X5 Xtreme is available in most markets for around PKR 30,000. At this price point, the Voice X5 doesn’t have a whole lot of competitors that provide the same feature set. The Sony Xperia Z stacks up well but is let down by a poor display. The most direct comparison is Qmobile’s Quatro Z4 and it’s much less clear who the winner of that battle is. The Voice X5 has the added advantage with Dual-SIM capabilities and a removable battery though. 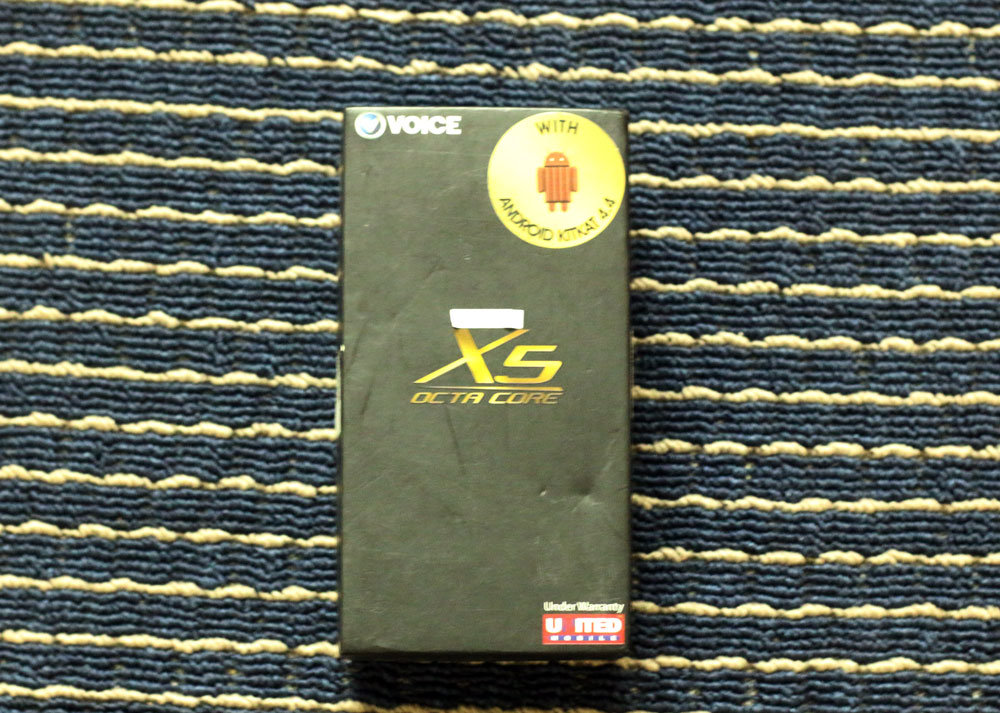 When you look at the overall package, it’s compelling. You get Android 4.4 that’s very close to stock Android, an amazing 5 inch display with 1080p resolution, great processing power and a very decent camera. On the other hand, it has weak graphics and a poor battery. It all comes down to priorities and trade-offs.

If you don’t mind the negatives we have mentioned in this review, we can safely say you are going to like the Voice X5 a lot. Please do not hesitate to let us know whether you like our new review style or not. We’re trying a lot of different things to arrive at a format that would be ideal for our readers to make an informed decision and your input is critical to the process.