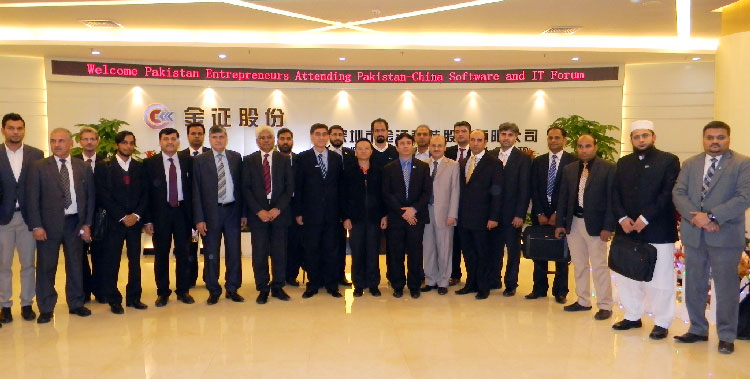 An IT delegation comprising of delegates from Pakistan Software Export Board (PSEB), CEOs of IT companies, and COMSATS Institute of Information Technology (CIIT), recently visited China to enhance bilateral cooperation and trade between the IT sectors of the two countries.

The visit to China was in-line with the current government’s push towards enhancing trade ties with neighbourly countries particularly China.

Pakistani delegation participated in Pak China Software and IT Forum, held in Shenzhen from December 15th to 16th , which was organized by Consul General of Pakistan in Guangzhou, Mr. Babar Amin, in collaboration with PSEB, CIIT, and Shenzhen Software Park.

Delegates of CIIT visited ZTE University to explore their research and training facilities and signed an MOU with ZTE also for setting up a training center in Pakistan.

The main aim of the IT delegation was to inform the relevant Chinese stakeholders about the opportunities available in Pakistan’s IT industry, to solicit Chinese interest in outsourcing IT work to Pakistani companies, and to partner with Pakistani companies for extending footprint of Chinese IT companies to Middle East.

The Chinese were intrigued to know that Pakistan has well over 2000 IT companies developing high end, enterprise grade software solutions for world’s largest and premier companies and that Pakistani IT companies regularly win awards at international IT events. Based on the company visits, five more MOUs are expected to be signed this month.

Managing Director of Pakistan Software Export Board characterized the signing of MOUs as the first step towards taking the trade ties between Pakistan and China’s IT sectors to the next level which would lead to enhancing exports of Pakistan’s IT products and services to China.

MD PSEB and Pro-rector CIIT invited Chinese IT companies to Pak China Business Forum to be held in March 2015 in Islamabad.