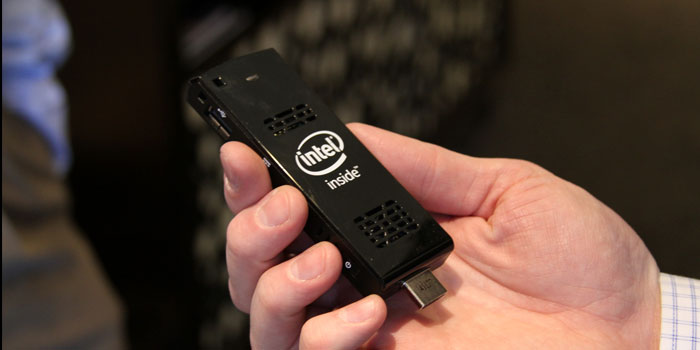 Portable devices such as the ChromeCast and Fire TV are cost-effective ways to turn your existing television into a “smart” tv as they offer video and game streaming via your home WiFi. Determined not to be outdone, Intel has just announced the launch of the “Compute Stick” which is a full Windows 8.1 PC on a portable USB stick.

The Compute Stick comes with a quad-core Atom processor, 32 GB memory, 2 GB RAM, WiFi and Bluetooth connectivity. There is also a version based on the Linux OS but with half the RAM. The Windows 8.1 model will retail for $149 and the Linux model for $89 respectively.

Revealed at CES 2015, the Compute Stick is roughly the same size as Google’s ChromeCast and is designed to have a number of potential applications. You can hook it up to an HDMI monitor, thereby creating an all-in-one PC or plug it into your TV to watch videos or browse through photos.

The left side of the stick has the micro USB port used to charge the device, a small power button, and a full-sized USB port for supporting peripheral accessories. With the launch of this device, it is clear that Intel is working feverishly to shrink the size of its computing products.

Its new Quark SE SOC is projected to help wearable technology become a functional reality. Given that it was late to develop products for Smartphones and tablets, Intel is determined to capture some of its lost market share in the new areas of consumer tech products.