It was just yesterday that Talal did a detailed post on Facebook’s hypocrisy and how Zuckerberg’s views on “freedom of expression”were flawed, and today Facebook removed a post of Hamza Ali Abbasi on the same topic just because he had questioned west’s dual standards.

Not to mention, Hamza Ali Abbasi has a verified page with over 1.6 million fans.

Before we go into details, let’s have a look at what Hamza had originally said in his post:

A french Muslim police officer dies doing his duty in the face of 2 mislead Muslim youth killing falsely in the name of the religion of peace, Islam.

Yes, even my blood boils when someone insults my Prophet (S.A.W)…But that does not give individuals the right to kill.

In Islam, only “Institutions” are allowed to kill for justice, not for revenge or hate. But west needs to understand too that freedom of expression includes criticism, disagreement or even rejection of faiths or ideology…but should not and must not allow “Insult”.

Would it be “freedom of expression” if i brand black people as Niggers or if i say Hitler was a messiah? Would i not be branded a racist or a anti semitic?

As Muslims all the world are condemning this incident…the west needs to rethink and fix its definition of “Freedom of Expression”. Otherwise…someone from almost 2 Billion of us Muslims will go ballistic and kill unjustly.

Hamza Ali Abbasi, today evening, announced that his up-mentioned post was removed from Facebook and his account was deactivated with the warning for expressing his opinion. 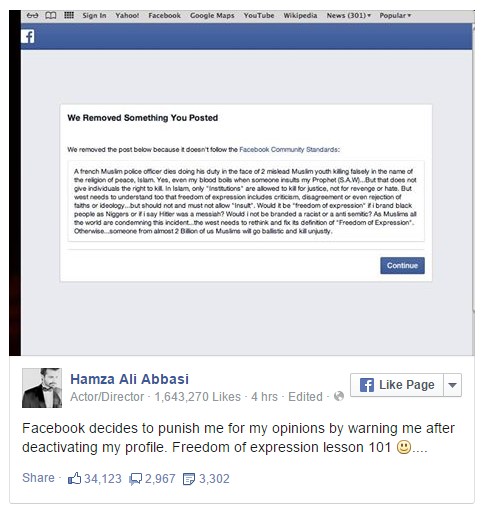 As evident from the post mentioned above, Hamza denounced attack on French magazine and termed the killings not acceptable in any given scenario.

Mr Hamza in his deleted post, had opined that west should understand Muslim’s feelings and that discussion, criticism or even rejection is one thing but insulting the beliefs of over 2 billion people under the the cover of “Freedom of Expression” is inhumane.

However, his post was termed against “Facebook’s Community Standards” and got deleted.

This has happened at a time when Zuckerberg had just reiterated his so-called slogan for not censoring his website. He had said, “I’m committed to building a service where you can speak freely without fear of violence.”

It took Facebook just one day to negate what Zuckerberg had claimed, and very clearly proving that the website bears dual standards for its “Freedom of Expression” policy.

UPDATE: Mark Zuckerberg has responded to the incident. You can read about it here.