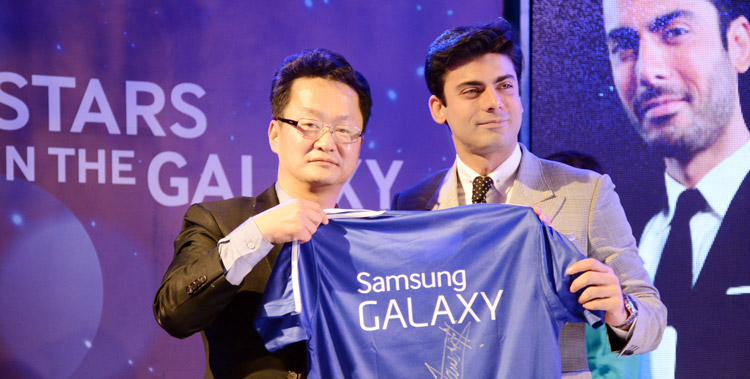 Samsung began its year with the signing of Fawad Khan and Farhad Humayun as the future Brand Ambassadors for Samsung’s mobiles under the Galaxy flagship at a mega event held in Pearl Continental, Lahore.

Fawad’s tremendous popularity as a vocalist, actor and model in Pakistan is well-known and now he has gained international recognition too, as he appeared recently in a Bollywood movie that was a box office hit and made him stand among the top notch stars of Bollywood. Whereas, Farhad Humayun is a famous model and lead vocalists and drummer of the Band “Overload”.

Both these stars have now tied bonds with Samsung to represent its powerful smartphones.

Samsung has also announced that they would continue to work with the “Josh” band, which has already been working as Samsung’s Brand Ambassador for over an year.

Fareed ullah Jan, the Head of Samsung’s Hand-Held Products (HHP) division said, “Samsung has had successful journeys with all its brand ambassadors and now the addition of Fawad Khan and Farhad Humayun in the Samsung Family, as the new Brand Ambassadors is also a very promising initiative for the company and the celebs.” Further he said, “We will continue working with the Josh Band as well, as our experience with them has also been amazing and I am sure, it will continue to be so.”

The high profiled event was attended by the celebrities, company’s officials, bloggers and media personnel.