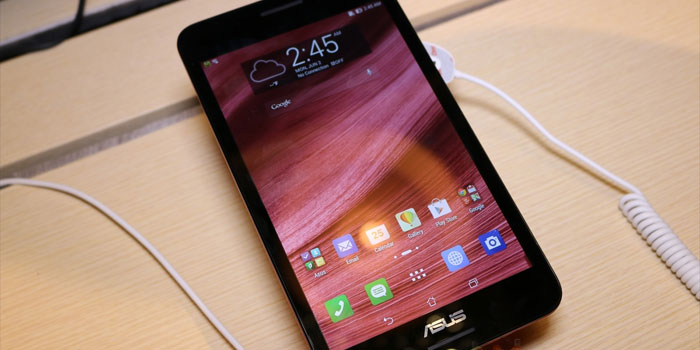 If you are still one of those people who thought “I just wish my phone was a bit bigger”, here you go. The new FonePad 7 FE375CL is the biggest new phone in the market and comes with quite an oomph under the hood.

The design of the phone is such that it can be held in one hand comfortably. The display is the least-interesting aspect sadly, with the 7” panel coming with a rather unimpressive 1280 x 800 resolution. It’s not a high-end device but Asus’s own cheaper Nexus 7 which was released way back in 2013 came with a better one.

Under the hood, you get the quad-core 1.3Ghz Intel Atom Z3530 processor with 2 GB RAM, PowerVR Series 6 GPU and either 8 or 16 GB worth internal storage. A duo of 5 and 2 mp cameras are found, with the former also capable of 1080p video.

The tablet comes with the latest Android Lollipop, customized by Asus, though thankfully the company has a history of putting up rather thin layers of skins. Battery capacity is 3,950 mAh.

The headlining feature would be the 4G LTE connectivity which allows voice calls and high-speed on-the-go internet connectivity. The pricing of the Fonepad 7 is set at $250.