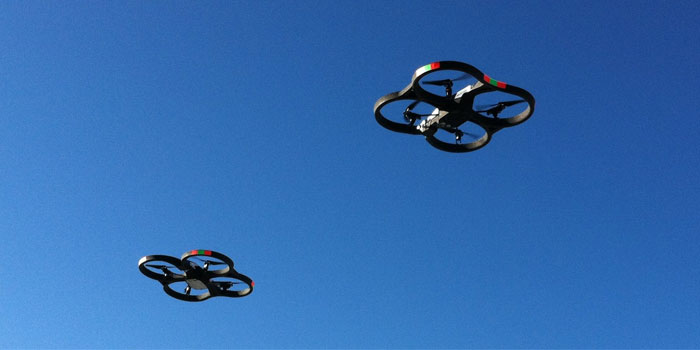 We in Pakistan are all quite familiar with the word Drone. At the first utterance of it our minds will usually go to the controversial bombings in Waziristan, but warfare is only one aspect of the massive potential drones possess. Drones are being tipped to bring about a sea of change in our private and commercial lives.

Commercial and personal drones are small GPS enabled flying machines that can be controlled through sophisticated remote controls for accomplishing various flying tasks. The avenues of utilizing drone technology are massive and drones could be a game changer for many industries. Aviation regulators around the globe want to ensure safety prior to allowing commercial use of drones.

Once the rules are in place we could see drones filling the skies especially in the USA. Their potential use as delivery machines is being explored in depth by companies such as Amazon. Its “octocopters” drones as part of its “Amazon Prime Air” project will be able to deliver any product at your doorstep within 30 minutes of your purchase.

Then there are companies such Flirtey selling textbooks in Australia which claim to have an even advanced mechanism of delivery through drones.  According to industry experts with the American Federal Aviation Authority looking into regulating the airspace for drones, it is not a question of if but rather how soon can companies begin cutting on costs and delivery time by utilizing drones. There are concerns of drones replacing humans in the delivery business but the postman will never be out of work as there is a limit to the weight drones can carry and deliver safely.

Safety is the regulators biggest concern when it comes to commercial drones; drones have to be safe for planes, birds and should not be falling out of the sky on people, their homes or cars. While the American regulators are still working on a policy, Australians have allowed the use of commercial drones to capture sports events, photography and for search and rescue services such as spraying chemicals to extinguish bushfires. Delivery via drones in Australia is also expected to be allowed soon.

The use of drones will not be limited to delivery services, already experts are exploring multiple facets of drone technology ranging from spraying pesticides at farms to monitoring electricity power cables especially in remote areas.  While directors in Hollywood are experimenting with newer perspectives they can explore to shoot films by using camera mounted drones. Other innovative use drones are for exploring new places such as MIT using it to show people around it campus.

We in Pakistan are also not too far behind in the game. In 2014 all of us witnessed a race for capturing the best moments of huge political gatherings by various TV channels and in doing so they started utilizing camera mounted drones. While these “News Drones” did give us a brand new perspectives on the jalsas and rallies safety concerns were raised by the organizers of the rallies and law enforcement agencies regarding the safety of the crowd these drones were hovering over.

There were also instances of law enforcement agencies banning the use of drones by the media at various gatherings. Very little is being done in terms of regulations and legislations when it comes to commercial drone usage in Pakistan, but guess the regulators have a lot more on their plates plus the usage is also at a minimal.

Drone usage in Pakistan is increasing, specially by news outlets

The prices for a commercial sized drone have really gone down and all thanks to the advancement in smart phone technology magnetometers, gyros, batteries, cameras, accelerometers, radios, GPS modules, and processors have all become smaller in size and their prices have drastically dropped.

The most important aspect for buying your own is durability as all enthusiasts who might have tried their hands on model airplanes or RC helicopters would know that you tend to crash them a lot when you are the learning how to fly them.

In case you are interested in getting your hands on a commercial drone for yourself it would cost you somewhere between $3,000 to $600, the ones being used by the media in Pakistan (those with Green and Red blinking lights that would come ever so close to the stage to capture close-ups of Bilawal or Imran Khan in their jalsas/dharnas) are DJI Phantom 2s with built-in GPS to keep them stable during high winds. You can buy a Phantom from $1,299 to $679 depending on whether you would want one with a built-in camera or own a separate attachable Go Pro camera.

On the other hand hobbyist drones being offered on Amazon can cost from $100 to as low as $25. Yes you can get your hands on the palm sized Proto Nano X for $25. These drones come with built-in cameras and depending on the model they can record videos on micro SD cards or relay Live video to your smartphones which can be attached to the remotes.

The cheaper drones are great for indoor use but are not reliable in windy outdoor conditions. Also almost all drones are battery guzzlers but with time and regulators allowing use of commercial drones more investment is expected to pour into drone development and battery time surly wouldn’t be an issue.

Drones are sure to give us a new high and the advent of the drone age is not too distant.